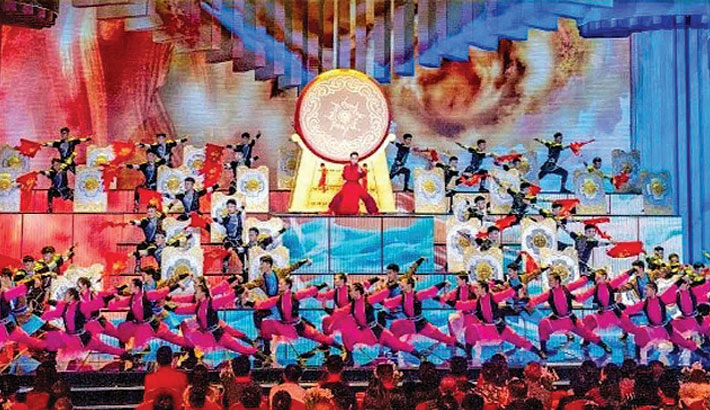 A poster of the Chinese Spring Festival Gala.

The annual Spring Festival Gala of China Media Group (CMG) won the hearts of tens of millions of televiewers in China and around the world on Friday evening.

The fabulous gala brought the elegance and uniqueness of the Chinese culture alive on the small screen as the Chinese were glued to television sets throughout the programme, said a press release.

People from all walk of life, alongside with the leaders of different countries and international organisations and their spouses, enjoyed the magnificent cultural extravaganza.

The gala known as Chunwan in the Chinese language has already earned the recognition of the most-watched television show of the world by the Guinness Book of World Records.

According to the Chinese lunar calendar, the Spring Festival begins today and the CMG arranged the four-hour stunning television show on the eve of the festival marking the occasion. Through witnessing the amazing show on the television screen, the Chinese around the world rang in the Chinese New Year called the Year of the Rat.

The splendid gala held in three separate venues, including Beijing, Zhengzhou of Henan Province, and the Guangdong-Hong Kong-Macao Greater Bay Area. However, programmes from the sub-venues in Zhengzhou and the Greater Bay Area were recorded broadcast due to the corona virus outbreak.

Besides, prominent actors Wu Lei, Peng Yuchang, and Eddie Peng also mesmerised the audience in a magic show of the gala. Apart the performances by celebrities, the gala also featured acrobatics and martial arts, and traditional art forms such as operas of different areas of China.

On the occasion, a special programme was held in Beijing on Thursday. Director General of the CMG Shen Haixiong attended in it as chief guest.

Based on the Spring Festival Gala this year, the CMG will make a documentary which is expected to be screened on more than 500 media platforms of over 170 countries from across the world.