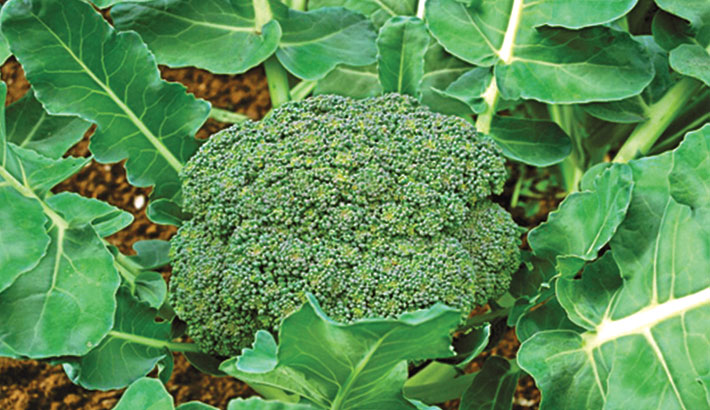 RAJSHAHI: Cultivation of broccoli, a non-conventional winter vegetable, has gradually been gaining popularity in the region including its vast Barind tract for the last couple of years by dint of its lucrative market price and gradually mounting demand.

Deputy Director of Department of Agricultural Extension (DAE) Shamsul Haque said initiative has been taken to expand the farming of the cash crop among the farmers in general, reports BSS.

He said broccoli is a winter vegetable with high nutritional content. It is full of vitamins, minerals and antioxidants.

It looks like cauliflower but its colour is green and not milky white like cauliflower. Soil condition and winter weather in the region are favourable for broccoli cultivation.

Taking advantage of the situation, farmers are seen showing their interest in cultivating Broccoli for the last couple of years due to better output and market price.

He said there is a bright prospect of broccoli farming commercially in the country’s northwest region.

Abul Kashem, a farmer of Parila village under Paba Upazila, said many farmers are cultivating the seasonal cash crop in the area as they are getting a better market price of their yield compared to many other crops.

Dr Shakhawat Hossain, Senior Scientific Officer of Bangladesh Agriculture Research Institute, said the cold weather being experienced in the region for the last couple of years which is suitable for cultivation of broccoli that is locally known as green cauliflower.

Almost similar to the cauliflower and its green leaves enriched with protein and vitamin C can be consumed directly. The price of broccoli in the markets is three to four times more than cauliflower.

Broccoli is gradually becoming popular among the urban people and the Chinese restaurants together with the grand hotels. They are using broccoli for making soup and other delicious foods.

Deb Dulal Dhali, Additional Director of DAE told that the crop was unfamiliar to the farmers and consumers of the rural areas.

He said various agricultural extension and research organizations have taken initiatives to make farming of the crop popular among the growers level. DAE has also grown the crop in projection plots aimed at encouraging the farmers to boost its production commercially.

He added the vegetable could easily be cultivated in the normal farming field as it is more tolerable to high-temperature than cauliflower and cabbage. Nutritive value of the crop was more than any other winter vegetables including cabbage and cauliflower.

ATM Rafiqul Islam, Project Director (Agriculture) of Barind Multipurpose Development Authority, said importance should be given to encourage the farmers through providing them with necessary financial support and inputs.

The farming method was almost similar to the cabbage and cauliflower. At least 40,000 to 50,000 plants could be produced from per hectare in 65-70 days, he said.

Agriculturist Ittefaqul Azad, former Deputy Director of DAE, says cauliflower is a winter vegetable which has become popular and is cultivated in such a quantity that in peak season the price comes down to a level that frustrates the growers.

In a situation like this, DAE should furthermore transfer technology for broccoli cultivation to farmers and encourage them to allocate half the land used for cauliflower cultivation to grow broccoli.

In this way, people of the region will be able to enjoy the taste and nutritional value of both cauliflower and broccoli and the farmers will also get a reasonable price for both.