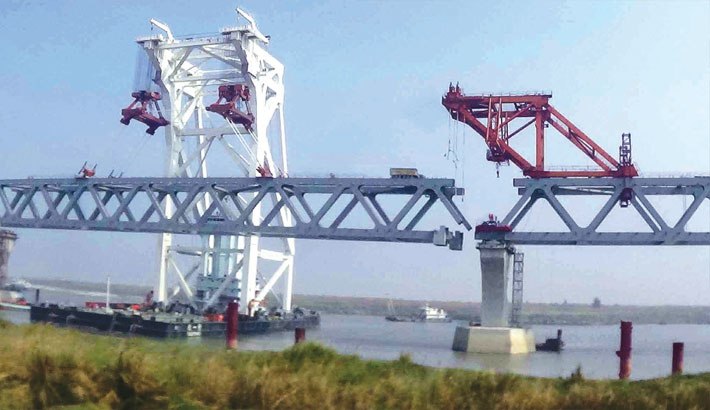 22nd span of the under-construction Padma Multipurpose Bridge was installed at the Mawa point in Munshiganj district on Thursday.

With the installation, 3,300 metres of 6.15km of the main bridge became bridge visible.

The bridge will have a total of 41 spans 150 metres each to complete 6.15km stretch.

The 22nd span namely 1-E was installed on the pier no. 5 and 6 at Mawa point around 11:30am, the project officials informed.

Earlier in the morning, a floating crane carried the span to piers no 5-6 from  from Kumarbhog Construction Yard at Mawa.

The span was installed at least two days ahead of schedule and engineers expect to install the twenty third span by the end of this month.

Installation of all the 41 spans are expected to be complete by July this year as construction work has accelerated from December last year.

There is a plan to install three spans every month from now on, according to project officials. Of the 42 piers of the 6.15km bridge, 36 are already complete.

The steel truss mega structure will have two decks. Trains will use the lower deck of the bridge while other motor vehicles will use its upper deck.

Construction work of the main bridge began in December 2015 and was expected to be complete by December last year.

However, the project deadline has been extended by 1.5 years to June 2021 after construction work faced delay due to piling problem at some points, which has been solved by foreign consultants.

Once complete, it will directly connect the capital city with twenty-one southern and south-western districts via rail and road.

The national economy is expected to see 1.2 percent additional GDP growth every year after completion of the project being implemented spending over Tk 301.93 billion. It will also help reduce 0.84 percent poverty percent, according to experts.