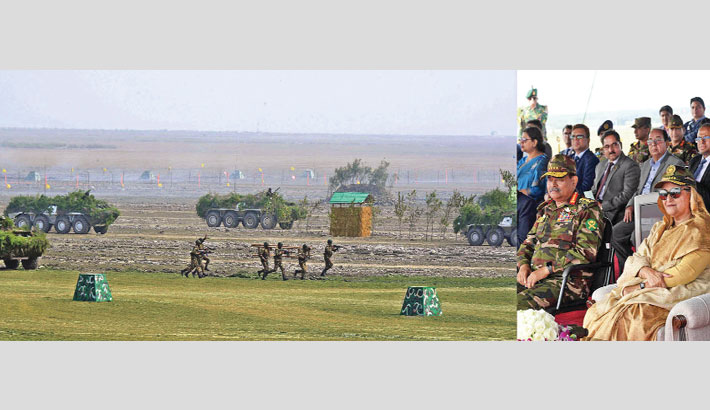 SWARNA DWEEP: Prime Minister Sheikh Hasina on Thursday reiterated her determination to develop the country further by freeing it from corruption, terrorism and militancy, reports UNB.

“We want to take the country forward further and free it from terrorism, militancy and corruption,” she said.

The Prime Minister was addressing a “Preetibhoj” (lunch) hosted on the occasion of the winter exercise of Bangladesh Army at the Swarna Dweeop, an island in Hatia upazia under Noakhali district.

Sheikh Hasina said her government wants people to live in peace and safe and lead an improved and decent life. “We’ve been working to achieve the goal.”

She said her government has been working to build modern, developed and well-equipped armed forces in the country so that they can cope with the pace of the modern world.

“A great job of protecting our independence and sovereignty was vested upon the armed forces. So, we’ve taken steps for modernising the armed forces and making them well-equipped with arms and ammunition and training so that they move in the world with their heads high,” she said.

Mentioning that the members of Bangladesh Armed Forces are working in various UN peacekeeping missions in different trouble-torn areas, Hasina said, “Naturally, they’ve to work with the armed forces of other countries. So, we want them not to fall behind.”

She said the armed forces are making massive contributions to the country’s development alongside safeguarding its independence and sovereignty.

Hasina went on to say, “Our armed forces are also playing a commendable role in the socioeconomic development in various trouble-torn countries alongside maintaining peace there.”

She put emphasis on imparting more training to the members of the armed forces saying that training is inevitable for any force.

The Prime Minister said her government has allocated Swarna Dweep, formerly known as “Jahaizzarchar” of Noakhali, so that the army could conduct exercise and trainings throughout the year.

The Navy and Air Force units also joined the hour-long exercise to demonstrate coordinated operations of the three armed forces at Swarna Dweep.

Modern warfare, including tanks, APCs, MiG fighter planes, MI helicopters of the three armed forces took part in the hour-long exercise where a mock war between the Bangladesh Armed Forces and an ‘enemy force’ was staged.

The drill ended with the victory of the Bangladesh Armed Forces.

The chiefs of the three services, local MPs, high civil and military officials were present on the occasion.