Trial of every crime to be held as per law 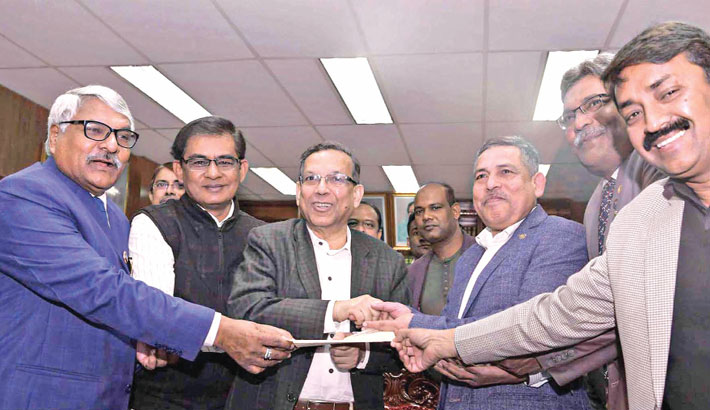 Law Minister Anisul Haq hands over a cheque for Tk 3 million to Pabna Lawyers Association for buying books at the ministry office in the capital on Tuesday. —SUN PHOTO

Expressing his reaction to the verdicts in the CPB rally bomb blast and 1988 Laldighi Massacre cases, Law Minister Anisul Huq on Tuesday said it has been proved with the judgments that no criminal is above the law, no matter how powerful they are, reports UNB.

“If there’s a prime minister like Sheikh Hasina in Bangladesh, people can rest assured that the trial of every crime or wrongdoing will be held as per the law,” he said while talking to reporters at the Secretariat.

Replying to a query about BNP Chairperson Khaleda Zia’s bail, he said the court jailed her for embezzling orphans’ money. “Besides, the Appellate Division of the Supreme Court denied her bail. All these things are under the jurisdiction of court.”

A court here on Monday sentenced 10 people to death in a case filed over the bomb attack on a CPB rally in Paltan area in 2001.

After long 32 years of the gruesome killing of 24 people attending Awami League chief Sheikh Hasina’s rally in Chattogram in 1988, a court in Chattogram on Monday sentenced five people to death in a case over the killing.

The court also sentenced them to 10 years’ imprisonment each in the case.