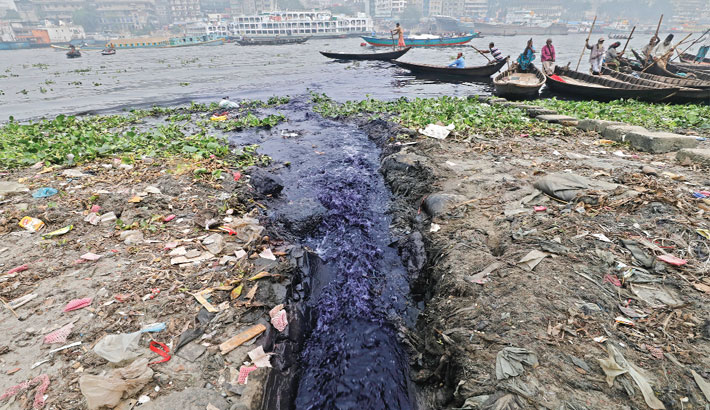 Dyeing factories release toxic effluent into the river Buriganga from many points in the capital. The photo taken recently shows that toxic liquid falls into the river through a drain at KC Saha Ghat in South Keraniganj on the outskirts of the city.

Much to the delight of environmental activists, the High Court has ordered closure of 231 factories which have been found polluting Dhaka’s life line, the Buriganga river.

The court also directed the government to shut down the factories set up without effluent treatment plants and environmental clearance certificates.

It also asked the director general of Department of Environment (DoE) to submit a compliance report on February 20, the next day of hearing.

The deltaic country is criss-crossed by 700 rivers, including tributaries, but a recent industrial boom, including the emergence of the world’s second largest garment sector, has prompted officials to turn a blind eye to the industrial waste being dumped into rivers.

In a landmark decision hailed by environmental activists, the court Monday ordered the authorities to take immediate action against the 231 factories including dyeing, rubber plants and tanneries.

The Department of Environment also informed the court that drives against the factories are likely to start after getting the schedule from its enforcement agencies.

The court order came following a supplementary writ petition filed by the Human Rights and Peace for Bangladesh (HRPB).

On June 1, 2011, the High Court following HRPB petitions issued a series of directives to stop dumping waste into Buriganga.

The HC bench directed the BIWTA chairman to cut off by January 7 all the illegal sewerage and drainage pipelines releasing waste into the river.

The court had directed WASA managing director to explain in 15 days why action would not be taken against him for submitting a false report in the court claiming that  930-km sewerage pipeline ‘dumps no human wastes in Buriganga or in the wetlands.’

WASA managing director was also directed to explain why action would not be taken against him for his failure to comply with its order passed on June 1, 2011 to stop releasing sewer  in the Buriganga.