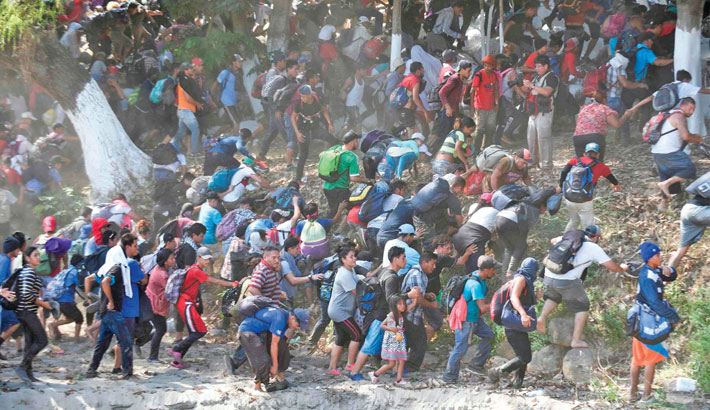 Central American migrants - mostly Hondurans, travelling on caravan to the US- run after crossing the Suichate River, the natural border between , Guatemala, with Ciudad Hidalgo, Mexico, on Tuesday. —AFP PHOTO

MEXICO CITY: Hundreds of migrants who waded across a river on Mexico’s southern border have been stopped from entering the country on their way to the US, reports BBC.

The migrants, mainly from Honduras, took to the water after being refused permission to cross a nearby bridge. The security forces fired tear gas to force the migrants back and rounded up those who managed to make it across.

Mexico has cut off migration routes to the US under pressure from President Donald Trump. National Guard troops with riot shields were seen trying to stop the migrants from climbing the banks of the Suchiate river, which marks the border between Mexico and Guatemala.

Some of those who were trying to reach Mexico threw stones at the police.

The detained migrants have been transferred to immigration stations. They will be returned to their home countries if their legal status cannot be resolved, the government said.

The migrants had been camped out in the Guatemalan town of Tecun Uman, across the border from Mexico’s Ciudad Hidalgo. Eight representatives of the migrants were allowed into Mexico for talks with the authorities and to pass a letter on to President Andrés Manuel López Obrador.

They urged him to let them pass and promised to respect the law.

Those who tried to cross the river on Monday were part of a 2,000 to 3,500-strong group dubbed “2020 Caravan”, evoking previous attempts to cross Mexico en masse to reach the US border.

For its part, Guatemala said several thousand migrants have crossed into its territory from Honduras since Wednesday. Many of the migrants on the Mexico border said they were fleeing violence, poverty and high murder rates.