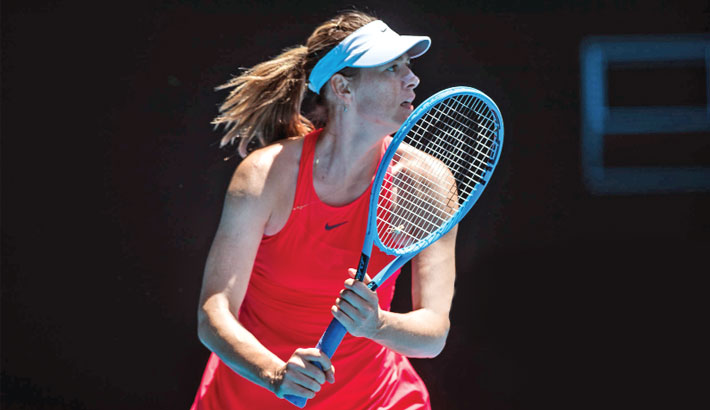 Top seed Rafael Nadal turned on the style as he launched his bid for a record-equalling 20th Major title at the Australian Open on Tuesday, but falling star Maria Sharapova hit a career low.

Australia’s Nick Kyrgios also cantered into the second round, but fourth seed Daniil Medvedev had to fight his way past American Frances Tiafoe in four sets.

Nadal, one shy of Roger Federer’s Grand Slam mark, dropped only five games as he swatted aside Bolivia’s Hugo Dellien 6-2, 6-3, 6-0 in just over two hours at a sunny Rod Laver Arena.

“It was a positive start,” said the reigning Roland Garros and US Open champion, wearing a bright pink singlet and matching trainers.

“What you want in the first round is just to win, and it’s better if it’s in straight sets.”

He joins Federer and defending champion Novak Djokovic in round two as the Big Three look to tighten a stranglehold that has brought them all but one of the last 14 Australian Open titles.

Nadal, the first player to be world number one in three different decades, is still thriving at 33 but it’s a different story for five-time Grand Slam winner Sharapova.

The 32-year-old Sharapova, playing on a wildcard as she wrestles with a shoulder injury, lost 3-6, 4-6 to Croatian 19th seed Donna Vekic, making her an opening-round loser at three straight Grand Slams for the first time.

The future looks uncertain for the former world number one, who won Wimbledon when she was just 17 but has not reached a Grand Slam final since she lifted the 2014 French Open trophy.

“I can speak about my struggles and the things that I’ve gone through with my shoulder, but it’s not really in my character to,” Sharapova said.

“I was there, I put myself out there (playing). As tough as it was, I finished the match — it wasn’t the way that I wanted.”

On a bumper day of 88 first-round matches, after rain wiped out half of Monday’s schedule, former US Open champion Marin Cilic and Milos Raonic both moved safely through.