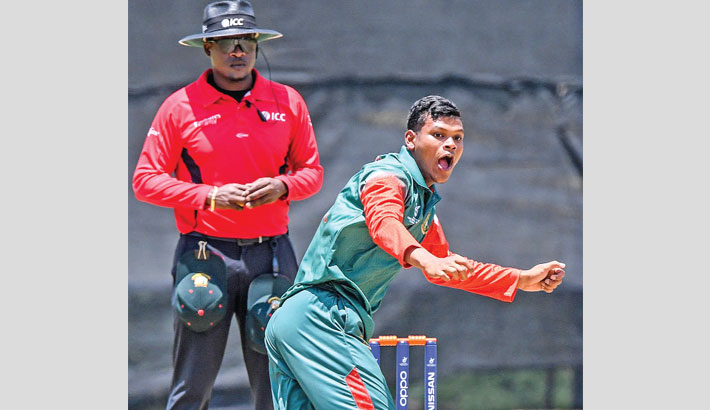 Bangladesh U-19 spinner Rakibul Hasan celebrates after taking a wicket during their ICC Under-19 World Cup match against Scotland in South Africa on Tuesday.

Bangladesh registered their 2nd consecutive victory in the ongoing ICC Under-19 World Cup in South Africa beating Scotland by seven wickets with 200 balls to spare on Tuesday featuring the first hat-trick of the event by left-arm spinner Rakibul Hasan.

With this win, Bangladesh confirmed the quarter finals from the group as they beat Zimbabwe by nine wickets in their first match.

In the day’s match, Scotland batted first after winning the toss, but their batsmen failed to justify the decision as they tumbled for 89 all-out in 30.3 overs.

In reply, Bangladesh chased down the target scoring 91 runs for the loss of three wickets in just 16.4 overs.

Bangladesh lost their opener, Tanzid Hasan, in the very first ball of the innings while chasing the easy target. In the second wicket stand, Parvez Hossain Emon and Shamim Hossain added 18 runs.

Shamim fell as the 2nd batsman scoring 10 off nine balls with two fours. Adding 17 runs in the third wicket with Towhid Hridoy, Emon fell for 25 off 15 with two fours and two sixes.

Bangladesh didn’t lose any more wickets. In the fourth wicket stand, Towhid and Mahmudul Hasan Joy added 56 runs to seal the game with 200 balls to spare.

The 17-year-old Scotish bowler, Sean Fischer-Keogh, took all three wickets that Bangladesh have lost in the game conceding 27 runs in four overs.

Earlier, Scotland were in big trouble against Bangladeshi bowling attack. Going to bat first after winning the toss, they lost four wickets just in 21 runs and could not recover the early damage.

Captain Angus Guy (11), Uzzair Shah (28) and Jamie Cairns (17) were the only three batsmen to have scored double-digit runs.

After losing five wickets for 52, Scotland suffered another collapse when Rakibul scalped three wickets in three successive balls in the 24th over. It was the first hat-trick of this edition of U-19 World Cup.

Rakibul completed his spell taking four wickets for 20 runs in 5.3 overs and was adjudged the man of the match.