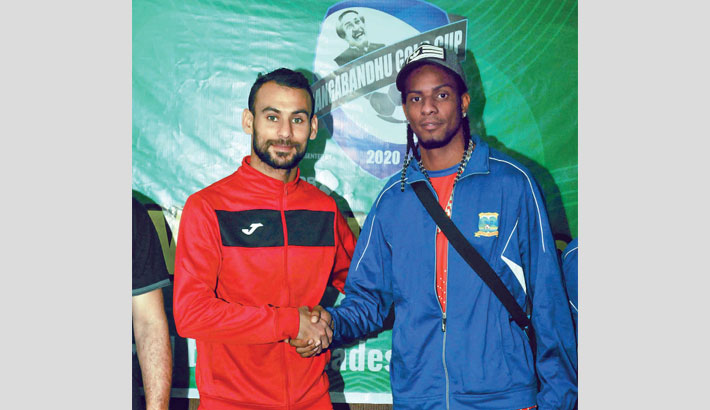 Captains of Seychelles National Football Team and Palestine shakes hands during the pre-match press conference of the first semi-final of Bangabandhu Gold Cup match which will begin today at 5:00pm at the Bangabandhu National Stadium in the capital. – BFF Photo

The reigning champions Palestine will play against lowly Seychelles in the first semi-final of the six-team Bangabandhu International Gold Cup Football Tournament today.

The match kicks-off at 5:00pm at the Bangabandhu National Stadium in the capital.

Palestine emerged as the Group A champions with all-win record. The West Asian nation got off a flying start beating hosts Bangladesh by 2-0 goals in the first group match and continued their winning streak beating Sri Lanka by the same 2-0 goal margin in the second group match.

On the other hand, Seychelles reached in semi-final as Group B runners-up riding on better goal difference. They conceded 1-3 goals defeat against Group B Champions Burundi in their first group match while played a 2-2 draw against Mauritius in the second group match.

Ahead of the match, Palestine Head Coach Daboub Makram said that they have good records against African nations.

“We have played against other African countries like Tanzania, Sudan, Libya, Morocco and we have good records against them,” Makram said in a pre-match press conference at BFF house in Motijheel in the capital on Tuesday.

About their preparation, the Palestine head coach said, “We have got a long-time-rest but sometimes the rest leads to both positives and negatives. We are focusing on positive things. We have taken normal preparation. We watch their (Seychelles) two group matches but we are focusing only on our team and develop the players. We came here to win the trophy and we have confidence in our players.”

Seychelles Head Coach Ralph Jean Louis said, “We are happy to qualify for the semi-finals but Seychelles have only one-day rest before the tough game while Palestine have much more rest. It’s difficult for the players as they got tired in the late stage of the last game. We have to minimise the fatigues of the players.”

“Palestine are very good technically and tactically. We are very aware of them. Hopefully, it will be a competitive game,” Louis added.