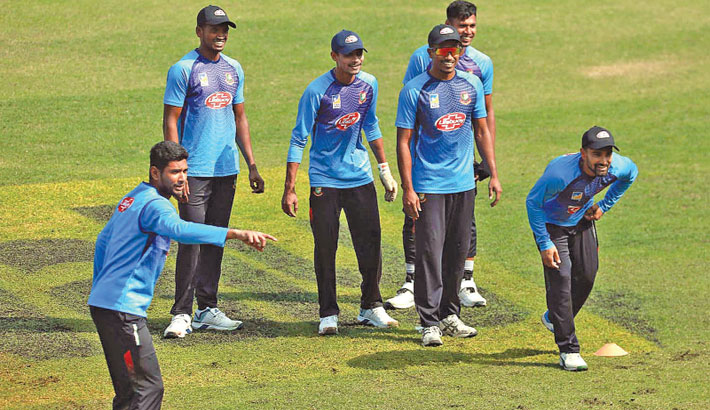 Bangladesh national team players are seen at a practice session ahead of Pakistan series at Sher-e-Bangla National Cricket Stadium in the capital on Tuesday. – BCB PHOTO

Bangladesh Twenty20 skipper Mahmudullah Riyad said on Tuesday that it was difficult for him to convince his family members to allow him for the upcoming tour of Pakistan but eventually managed to convince them though.

Mushfiqur Rahim had already withdrawn him from the tour of Pakistan due to security reasons and there were speculations after being reported that even Mahmudullah can follow the footstep of Mushfiqur in this regard.

Bangladesh Cricket Board and Pakistan Cricket Board recently announced that the series against Pakistan will take place in three-phase comprising two Test matches along with an ODI’s and three Twenty20 internationals.

The series was initially slated in January-February that included two Tests and three T20’s but the tourists declined to stay there for more than seven days on one go as they failed to get the permission due to recent unrest in the Middle East and a new itinerary was prepared after the intervention of ICC President Shashank Manohar.

Bangladesh will play the opening phase of the three-installment tour by taking part in the three-match T20’s series, scheduled from January 24-27.

“It was definitely tough (to decide about touring Pakistan) during the beginning because there was concern (security) from my family,” Bangladesh T20 skipper Mahmudullah told reporters when security concern was tabled in front of him just after he sat down for the pre-series media briefing at the Sher-e-Bangla National Stadium on Tuesday as the team will leave Dhaka for Pakistan today.

“I have discussed with my family and later they have agreed and I am quite relieved with it as it implies that my family won’t feel any stress about it (touring Pakistan),” he said adding that his teammates had shrugged the security concerns from their head and eyeing to focus on their game.

“Pakistan is providing us the best possible security arrangement and at this moment I can say something that the other members of the squad, is not worried about it (security), the decision has been taken. We are only thinking about our game. How to perform well and win- we are thinking about it,” he said.

Mahmudullah said that his teammates don’t need to judge their opponents through their world number one T20 ranking as that will put extra pressure and insisted to play their natural game as he feels if they can play to their potential they can win the series.

“Ranking says something else. We are nine and they are at one. They have been playing consistently in T20. The way we have played in the last couple of series, I have very hopeful that we will be able to play some good matches. I hope, we will try to win the series,” said Mahmudullah.

“Pakistan might have played badly in the last couple of series but I think they are a very strong team in T20 and we will be playing at their home,” he said.

“They have lost against Sri Lanka in the last series and maybe they are concerned about it but we will have to be a focus on playing well. I think the players who are in the squad, they are in good touch and if we can utilise and understand this and play our best cricket, we will be able to win,” he said.

“If we think about what they did in their last series and ranking (it won’t help) and I don’t think there is anything to be worried,” he said.

“How we can apply our cricket and utilise ourselves personally, I think it is important to think about it,” he said.

Mahmudullah said that he is confident with his squad and added that he along with Tamim Iqbal is well aware that they will have to take the bulk of responsibility considering some senior members are missing the series.

“Of course the more I will be able to push the team forward, I will be able to bring more runs for the team. The amount of experience I have, I will try to give my best. There are a couple of batsmen who might have to bat in the different batting orders,” he said.

“Afif batted in the middle order in the last couple of series. He batted excellently in top order during the BPL. Many top-order batsmen may have to bat in the lower middle order. It is hard to cope mentally. It is also important to practice. Everyone has to try their best. How much effort you are giving for the team that is important. I hope more and less everyone knows it,” he concluded.