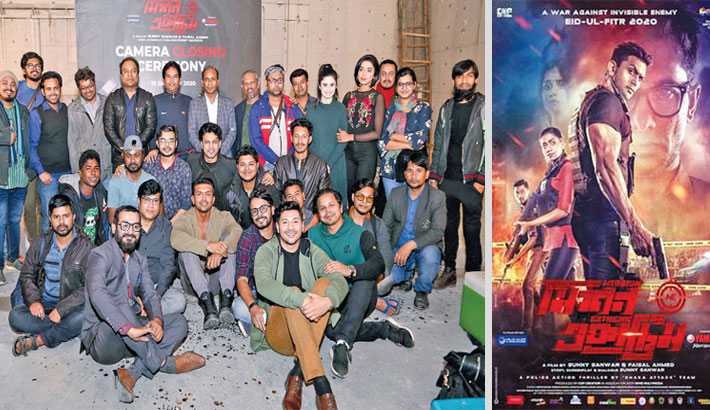 The shooting of much talked about police action thriller film ‘Mission Extreme’ has been completed in Dhaka recently. Jointly directed by Sunny Sarwar and Faisal Ahmed, the last day’s shooting of the film ended at Bangladesh Film Development Corporation (BFDC) on Sunday through camera closing ceremony.

Chief of Counter Terrorism and Transnational Crime of Police Md Monirul Islam attended the closing ceremony as the chief guest.

Actors Arefin Shuvo, Oishee, Nabila, were, among others also spoke on the occasion and expressed their feelings.

Mission Extreme is an upcoming 2020 Bangladeshi action film starring Arifin Shuvoo, Jannatul Ferdous Oishee, Sadia Nabila and Taskeen Rahman in lead roles. This film is the debut film of Miss Bangladesh Oishee. After success of Dhaka Attack (2017) on December 2018, Sunny Sarwar had announced about the making of Mission Extreme. It was also announced that Arifin Shuvoo would play as the protagonist of the film and the filming of the film would start from March 2019. In 2019 Taskeen, Oishee, ABM Sumon, Sadia Nabila and other actors and actress had attached to the film for acting.