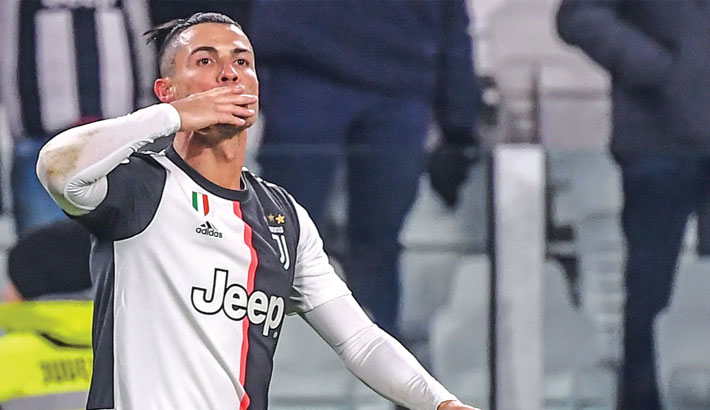 Juventus forward Cristiano Ronaldo celebrates after scoring his second goal during their Serie A match against Parma at Juventus stadium in Turin on Sunday. – AFP PHOTO

A double from Cristiano Ronaldo helped Serie A leaders Juventus to a 2-1 win over Parma on Sunday, while also adding more records to the 34-year-old’s impressive collection, reports Goal.

Ronaldo opened the scoring after 43 minutes at the Allianz Stadium before hooking in his second in the 58th minute after Parma had equalised just moments earlier.

Those efforts mean Ronaldo has now scored in seven straight Serie A games - the first Juventus player to do so since David Trezeguet in December 2005.

That run of form has also seen his overall league goal tally for the season increase to 16, handing him a record all of his own.

Ronaldo is now the only player in the top five European leagues history to score at least 15 goals in each of the last 14 campaigns, what not even his close rival Messi has not been able to do so.

Ronaldo has also become the fifth Juventus player to score 16 goals in his first 20 Serie A games, and the first since Omar Sivori in 1960.

Since the 2006-07 season, the Portugal international has scored a stunning 414 league goals for the likes of Manchester United, Real Madrid and most recently Juventus.

Ronaldo struck 21 times in Serie A last season, with his current haul of 16 now the second best in the league behind current Golden Boot leader Ciro Immobile, who has scored an impressive 23 goals for Lazio.

Sarri is happy to take the rough with the smooth when it comes to his star man, though, who claimed new records in the process of scoring his brace.

“We have a champion who sometimes creates a problem for you but solves 100 of them,” he told Sky Sport Italia . “The rest of the team has to revolve around him.”

With their star attacker on fire in front of goal, Juventus have now opened up a four-point lead at the league summit after second-placed Inter were held to a 1-1 draw against Lecce on Sunday.

Paulo Dybala claimed the assist for Ronaldo’s second strike against Parma, with manager Maurizio Sarri declaring prior to the match that it’s a myth the duo can’t play well together.

“It seems to me that Dybala is doing the best things this year with everyone, he is always doing well,” Sarri said.

“With him and Ronaldo, we have fewer players in the middle, but lately with them both we have always created and scored.

While Ronaldo has stolen the show in front of goal this season, Dybala has provided solid back-up, netting 11 times in all competitions.