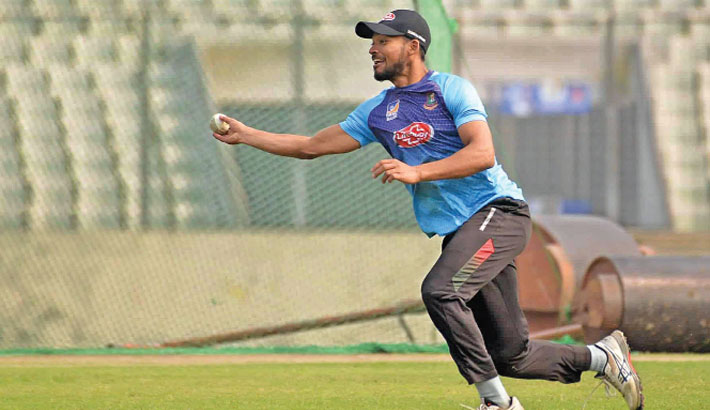 Bangladesh National Cricket Team opener Nazmul Hossain Shanto stretches out to catch a ball during their practice session at Sher-e-Bangla National Cricket Stadium in the capital on Monday. – SUN PHOTO

Opener Nazmul Hossain Shanto said on Monday that he is eyeing to make a fresh start in the national set-up leaving behind his previous disappointments for not being able to cement his place in the Bangladesh team.

Nazmul can certainly be considered as a late bloomer considering he failed to realise his batting potential in the middle in the recent past despite being considered as one of the batting prodigies of Bangladesh.

Nazmul just managed to score 115 runs in the first eight innings of the just concluded Bangabandhu Bangladesh Premier League (BBPL) and just when it seemed that he is on his way to lose another chance to highlight his credentials in front of the masses, he struck his maiden T20 hundred for Khulna Tigers to earn an important win against Dhaka Platoons and followed that with another unbeaten 78-run knock to help them reach the final.

As BBPL was considered to be a huge platform for the youngster trying to impress the national selectors who are drawing the roadmap for the upcoming ICC T20 World Cup, it appeared Nazmul hit the jackpot by announcing his arrival in BBPL in style to indicate that he is ready for the big stage.

“I am not thinking about my past. I will try not to repeat those mistakes,” Nazmul told reporters at Sher-e-Bangla National Cricket Stadium on Monday as they prepare for the upcoming tour of Pakistan.

“In the last few matches I played well in BBPL and I am sure that if I can have this confidence then I can play well there as well,” he said adding that he now can remain focused on the job at hand despite failing at times like he did in the first eight games in BBPL.

“I think I have changed a lot mentality-wise as I believe I can score in this (T20) format,” he said.

“I did not score much runs in the first few matches and my confidence was a little down but I prepared myself by working on my mentality which proved that I can score runs in these format,” he said.

“I was trying to bring back my self-belief and as I have got it back I could score some runs (in the last phase of the competition),” he said.

Bangladesh head coach Russell Domingo insisted that they are going to experiment with the batting order and Nazmul appeared like he is ready to take the challenge during the tour to Pakistan for the three-match T20 series.

“I am not worried about the batting position, as I got into the team I can play in any position and I will try to perform wherever I play and at any batting position,” said Nazmul adding that he prefers to bat at the top though.

“Usually I play in the top-order and I am comfortable batting at top-order but as a professional cricketer, I should be able to score runs at any batting position,” he said.

“I think skilled cricketers can score runs at any position and I am thinking that wherever I get the chance to bat, I will try to perform,” he said adding that he is not taking any extra burden of responsibility of te sort that he needs to fill the gap created by Mushfiqur Rahim’s absence, who has withdrawn himself from the tour citing family issues.

“Our selectors have faith in us and have brought us to play. We are not thinking about Mushfiqur bhai’s absence. We have to score more runs and there is nothing like that,” he said.

“We are positive that if we play to our strength than we will not have any problem,” he said.

Nazmul added that they are not thinking about security issues and added that instead they are eyeing to leave a mark against Pakistan at their own backyard.

“I am not thinking much about that (security). As a professional cricketer, I am focused more on the game and this (security) is not in my hands so there’s no point worrying about it,” told Shanto.

“I went there last time (with the Emerging team in 2017) and I think the wicket that we played on was a very good and sporting wicket,” he said.

“If the bowler bowls in the right area then they get help and batsman can score runs as well if he applies himself. If we can play to our strength and execute our plans than we can score runs and bowlers can take wickets as well,” he said.

“In T20 cricket any team can beat any team and we are not worried about the series very much as we will take it match by match. The team that plays well on the particular day will win and we are focusing to perform on that particular day,” he concluded.