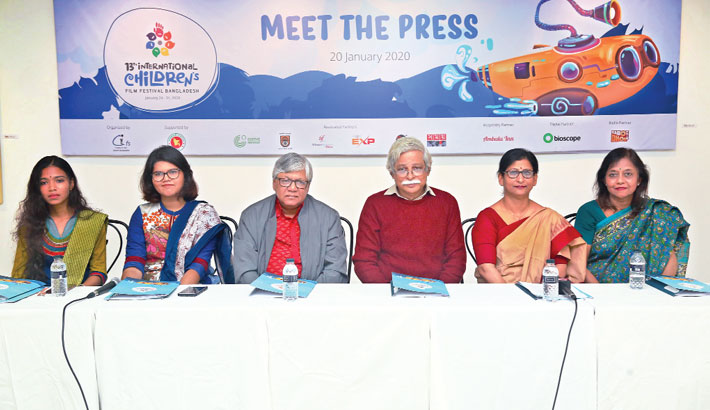 The 13th International Children’s Film Festival Bangladesh 2020 will begin from January 24 to  January 31. The slogan of this year’s festival is ‘Future in Frames’.  Like every year, Children’s Film Society Bangladesh is organising the eight-day festival.

The inaugural ceremony of the festival will be held at 4:00pm at Shawkat Osman Auditorium at  Central Public Library. The programme will be inaugurated by Former Finance Minister Abul Mal Abdul Muhith and Information and Communication Technology Minister Zunaid Ahmed Palak will be present as the special guest.

The inaugural ceremony will be presided over by Mustafa Monwar, the chairman of the Festival Advisory Committee.

The main festival venue is Shawkat Osman Auditorium in Central Public Library. In spite of the inaugural day, film screening will be held at 11:00am, 2:00pm, 4:00pm and 6:00pm, in total 4 times a day.

179 films from 39 countries will be screened at 5 different venues in Dhaka.

One of the main attractions of this festival is Bangladeshi Children Filmmaker’s section. 18  films have been selected for screening from 48 total submissions. From which, 5 best films will be awarded. As award, there will be crest, certificate and a prize money. The Jury board for Child Film Section consists of five members who are also aged under 18. The Children will choose the best films made by thechildren.

This was disclosed at a press conference held at Alliance Française de Dhaka in the capital’s Dhanmandi area on Monday.  Science fiction author and academic Muhammed Zafar Iqbal, film director Morshedul Islam, were, among others spoke at the press conference.