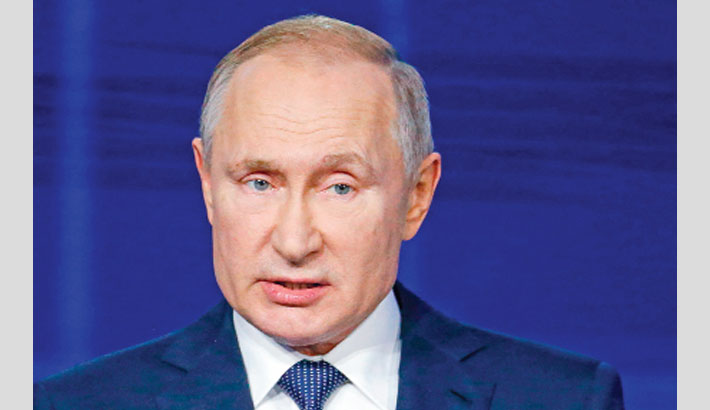 MOSCOW: President Vladimir Putin has said he does not want Russia to return to the Soviet-era practice of rulers dying in office without a succession plan, as speculation swirls over his future after he unleashed a political upheaval this week, reports AFP.

The 67-year-old Russian leader said a transition plan for the country was crucial, in comments several days after his shock proposal of sweeping changes to the constitution saw the government resign and a new prime minister appointed.

Putin, who has been in power for two decades, was asked if he could consider removing presidential term limits from the constitution during a meeting with World War II veterans in his hometown of Saint Petersburg on Saturday.

But he appeared to reject the idea. “In my view, it would be very worrying to return to the situation of the mid-1980s when heads of state one by one remained in power until the end of their days, (and) left office without having secured necessary conditions for a transition of power,” Putin said.

“So, thank you very much, but I think it’s better not to return to the situation of the mid-1980s.”

Chernenko’s successor Mikhail Gorbachev introduced perestroika and glasnost reforms to transform the Soviet system and presided over the eventual collapse of the USSR. Putin, who is due to step down in 2024 after his fourth Kremlin term ends, said he understood what he called people’s concerns about the continuity of power.

“For many of our people this is linked to worries about stability in society, stability in the state—both foreign and internal stability—I perfectly understand this,” he said.

Many observers have said Putin’s proposals are designed to ensure his grip on power after he leaves the Kremlin and his critics have accused him of orchestrating a “constitutional coup”.

On Wednesday, Putin stunned Russians with his constitutional proposals, including transferring more authority to parliament and enshrining the role of the State Council, an advisory body, in the constitution.

They would be the first significant changes to the country’s basic law since it was adopted under Boris Yeltsin in 1993. The announcement triggered the resignation of the government, led by Putin’s loyal lieutenant Dmitry Medvedev.

A previously little known tax official, Mikhail Mishustin, was tapped by Putin to take over as premier and he was officially appointed on Thursday.