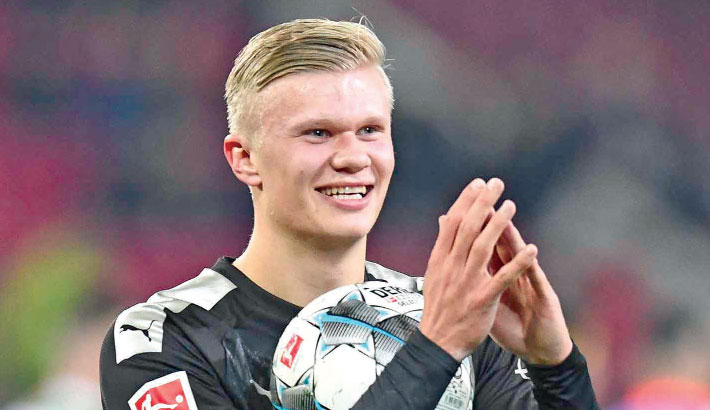 Norwegian rising star Erling Braut Haaland came off the bench to claim a hat-trick inside 20 minutes on his Borussia Dortmund debut and inspire a 5-3 comeback win at Augsburg in the Bundesliga on Saturday — despite not being fully fit.

The 19-year-old showed why Dortmund paid Salzburg 20 million euros ($22 million) for him last month when he came on in the 56th minute with his new team 3-1 down.

“He didn’t train at all in December, he had an injury, and in our training camp we couldn’t do much for three or four days,” said Favre.

“He’s not quite ready to play the 90 minutes and we have another game on Friday (home to Cologne).”

Haaland said he was “pretty relaxed” about his hat-trick and brushed off questions about his fitness, replying dryly “did I look fit?”.

“I’m at a fantastic club with great team-mates and good people around me. I came here to score goals and it was a good debut for me.”

Dortmund’s victory left them fourth in the table, level on points with defending champions Bayern Munich and Schalke, but seven points behind leaders RB Leipzig, who opened a five-point gap at the top with a 3-1 win over Union Berlin. Haaland needed just 183 seconds to open his Dortmund account, then added two more in quick succession for his sixth hat-trick this season having already scored 28 goals in 22 games for Salzburg.

“He is still young and we would advise against expecting too much, but he brings us a lot of strength and has an incredible mentality,” said Dortmund sporting director Michael Zorc.