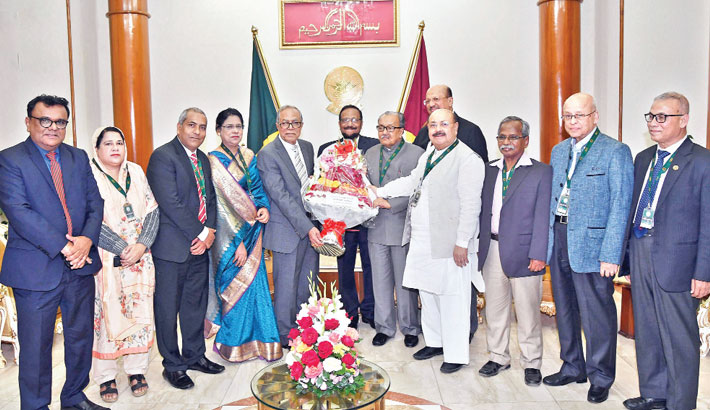 President M Abdul Hamid on Sunday asked Bangladesh Press Council to play an active role to ensure discipline and professionalism in mass media as a delegation of it paid a courtesy call on him at Bangabhaban, reports BSS.

“Play a responsible role to ensure discipline and utmost professionalism in mass media,” he said during the meeting with a 10-member delegation led by Press Council Chairman Justice Mohammed Mumtaz Uddin Ahmed.

“Bangladesh Press Council can play a very significant role for the healthy development of the mass media,” the head of the state observed.

The Press Council chairman apprised the President of the overall activities of the council, saying that the press council meantime started making a database for journalists across the country.

He told the President that on the occasion of Mujib Year, the birth centenary of the Father of the Nation Bangabandhu Sheikh Mujibur Rahman, they have a plan to set up “Mujib Corner” at all press clubs in the country.

“Besides, the press council is conducting different training programmes for journalists to develop the professional skills for newsmen,” Justice Mumtaz informed the President, seeking his (President) all-out support to run the institution in smooth manner.

The President assured the delegation of providing all necessary supports in performing their tasks properly.

Secretaries concerned to the Bangabhaban were also present.