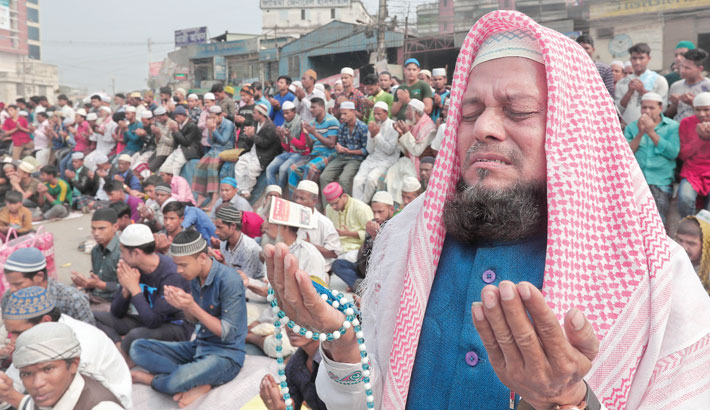 Akheri Munajat : Seeking blessings for the Muslims and mankind, devotees offer Akheri Munajat (final prayers) during the second and last phase of three-day Biswa Ijtema, the second largest Muslim congregation, on the bank of the Turag river in Tongi on Sunday. - Reaz Ahmed Sumon

The second and last round of Biswa Ijtema ended with Akheri Munajat seeking divine blessing for the Muslim Ummah on Sunday.

Maulana Mohammad Jamshed of India conducted the final prayer which began at around 11:47 am and ended at 12:07 pm.

Meanwhile, nine devotees died at the Ijtema venue during the second phase of the religious gathering.

The first phase of Bishwa Ijtema ended on January 12 where followers of Maulana Zubair Hassan, the imam of Kakrail mosque, took part.

The government extended all cooperation for holding the religious event peacefully, said the State Minister.

The Bishwa Ijtema has been taking place on the bank of Turag River in Tongi since 1967.

The second phase of Biswa Ijtema began on the banks of the Turag River at Tongi in Gazipur on Friday.