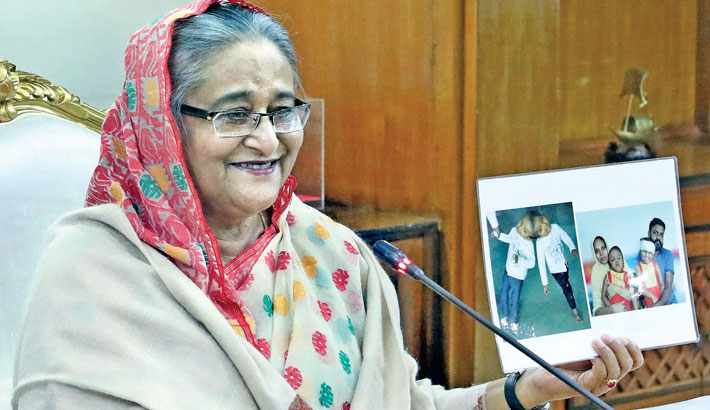 Prime Minister Sheikh Hasina happily holds up a photo of twins Rabeya-Rukaya at a meeting at her office in the capital on Sunday. With the PM's support, the babies conjoined heads have been separated. – Focus Bangla

It is not only rare, but a matter of great luck to be cared and loved by a country’s prime minister who helps to give a new lease of life for that person. Little Rabeya and Rukaya, two separated conjoined twins, are just that fortunate as Prime Minister Sheikh Hasina assured of her continued support for their well-being.

of the Sheikh Hasina National Burn and Plastic Surgery Institute, went to brief her on the condition of

the three and half-year-old twins as the critical surgery to separate the their conjoined heads was supported by her.

“Our affectionate Prime Minister has assured us of providing all sorts of help to conduct such critical surgery successfully in future,” Dr Sen told reporters after meeting the premier and showing her the current photograph of Rabeya Rukaya.

“Now they are leading a normal life but around a month before we conducted a neuro surgery on Rabeya and she needs another surgery a month later,” he said.

The conjoined twins who were born with joint heads were separated after a successful operation titled “Operation Freedom” at Dhaka’s Combined Military Hospital (CMH) on August 2, 2019.

The 33-hour surgery, which separated their skulls and brains, ended where more than a hundred surgeons and anesthetists from home and abroad took part.

The operation was carried out with the support of Prime Minister Sheikh Hasina and Defenceless People Foundation (ADPF) of Hungary. Earlier, they were sent to Hungary for treatment and Sheikh Hasina bore their entire cost of treatment both at home and abroad.

Dr Sen said the prime minister was very delighted to learn that Rabeya and Rukaya would now be able to lead a normal life.

So far only 17 such operations were carried out in the world, and this one is the first in entire Asia.

The three and half years old twins, who were born with joint heads, suffered from a rare embryological disorder affecting an estimated one in every five to six million births. They, daughters of Rafikul Islam, hailed from Chatmohor upazila in Pabna.