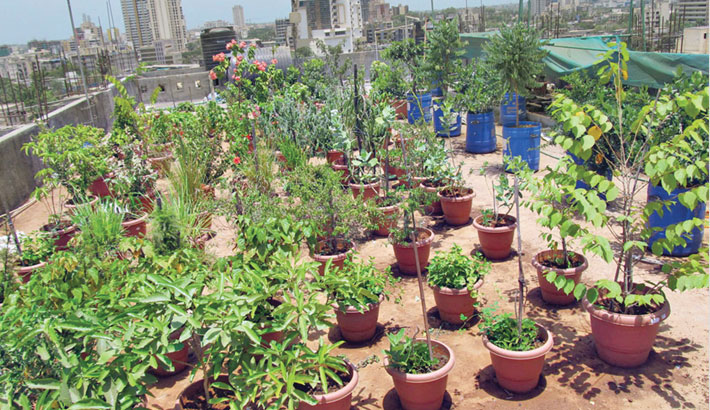 Creating more green and blue spaces can prevent the rise of temperature in crowded Dhaka and promote sustainable development of the megacity, urban experts have said on Sunday.

The high temperature in Dhaka city is affecting city life as well as the very nature of the ecosystem, the said suggesting rooftop gardening and following building codes as a solution to the problem.

The observation came at the seminar on “Mitigation Strategies for Warming Dhaka Megacity Implication for Sustainable Development.”

Bangladesh Institute of International and Strategic Studies (BIISS) in collaboration with Curtin University, Australia and meteorology department of Dhaka University organized the event at BIISS Auditorium.

“Usually, Dhaka’s temperature is two degrees higher than that of the country’s other regions. Sometimes, it is eight degrees higher mainly because of the dense population, large buildings and a large number of vehicles,” commented Dr Mahfuz Kabir, research director at BIISS.

Dr Kabir and Austin University’s Dr Ashraf Dewan jointly conducted a study of the issue, which was presented at the seminar.

It showed that the rate of survival of germs and bacteria is increasing, resulting in the frequent occurrence of many diseases with the rise in temperature in Dhaka.

Besides, the excessive temperature is affecting the human body and psychology.

To address this problem, they suggested several measures including cutting down carbon emission, properly maintaining building code and keeping provision of waterbodies in densely populated areas.

Dr Kabir said the government may consider providing incentives on rooftop gardening or similar attempts, including rebate on holding tax, VAT or corporate tax, to attract individuals and corporate houses.

Noted climate expert Dr Saleemul Huq observed that expansion of Dhaka city in the east may resolve the warming problem, but it should be done very carefully so that previous mistakes in wholesale urbanisation are not repeated.

Speaking on the occasion, Planning Commission Member Dr Shamsul Alam differed on the suggestions for rooftop gardening, saying that he is against such gardening with the groundwater.

“Rooftop gardening is a good practice. But I have a serious reservation about it if is done using groundwater. Instead, rainwater harvesting should be promoted for roof gardening,” he said.

He argued that some 1,000 pumps of WASA are already lowering groundwater level, which might be aggravated by the roof gardening.

He also shared experience of Barind irrigation project, where, he said groundwater level fell from 30-40 metres to 70 to 80 metres.

While going for any new ventures, their side effects and inter-connected effects should be taken into account, he said, pointing to bitter experiences in case of eucalyptus tree or African catfish.