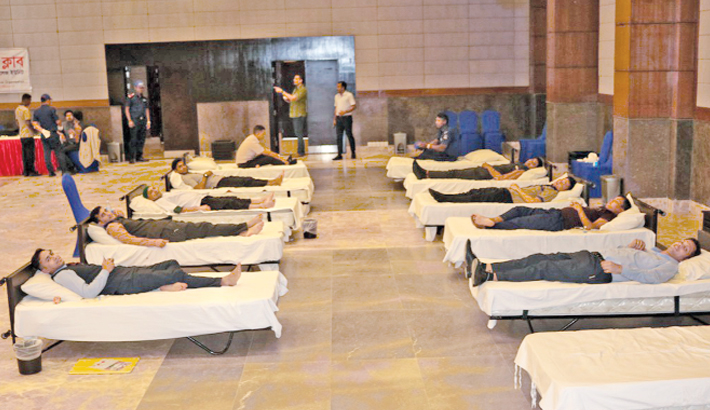 Sayeman Beach Resort, a leading hotel in Cox’s Bazar, organises a blood donation programme for Rohingyas at the hotel recently, marking the 5th founding anniversary of the hotel and the birth centenary of Father of the Nation Bangabandhu Sheikh Mujibur Rahman . — SUN PHOTO

Sayeman Beach Resort, a leading hotel in Cox’s Bazar, organised a three-day programme, marking the 5th founding anniversary of the hotel and the birth centenary of Father of the Nation Bangabandhu Sheikh Mujibur Rahman.

The programmes were also organised on the occasion of the 77th birthday of former Housing and Public Works Minister Engineer Mosharraf Hossain, father of the hotel Managing Director (MD) Mahboob Rahman.

The three-day programmes included blood donating for Rohingyas at the hotel on Wednesday and Thursday and cleaning of the sea beach from Sayeman Beach Resort (Kolatali) to Sugandha Point on Tuesday.

Nurul Islam BSc, former Minister of Expatriates' Welfare and Overseas Employment, along with some foreign tourists cut a cake to mark the birth centenary of Father of the Nation Bangabandhu Sheikh Mujibur Rahman in Sayeman Beach Resort.

Mahboob Rahman inaugurated the programmes through video conferencing. Addressing the inaugural programme, Mahboob said they have been carrying out humanitarian activities along with the business since long.

He said, "The blood donation programme was organised to standby the persecuted Rohingyas,” he said,"Some 200 bags of blood collected from the officials and staff of the hotel will be handed over to 250 Bed District Sadar Hospital, Cox's Bazar for the Rohingyas". “Our efforts for victims of different crises will remain continued in future,”

Highlighting impor-tance of the world’s largest sea beach, he urged all involved with tourism industry to come forward for protection of the industry. He also said the hotel started its journey some 54 years back and launched newly beside the beach five years back. Terming tourism as a potential industry, he said they will develop three Cineplex within next two years beside the hotel to facilitate amusement of the tourists.

He also emphasised the need for effective steps for putting up the sea beach to attract more tourists from home and abroad.

To celebrate its 5th anniversary, Sayeman Beach Resort will run a contest from 15th January to 22nd January 2020 through Facebook.

During the week long campaign, entrants will need to share a photo of their Sayeman moment, with accompanying caption of what they love about the Hotel. To be eligible to win, entrants must follow Sayeman Beach Resort on Face Book, tag the property and 5 other friends in the post, and use the hashtag #SayemanCelebrate5.

Five winners will be selected to win voucher for a one-night accommodation with breakfast.  Winners will be announced on Syeman’s Facebook page and will be contacted individually in the beginning of February 2020.