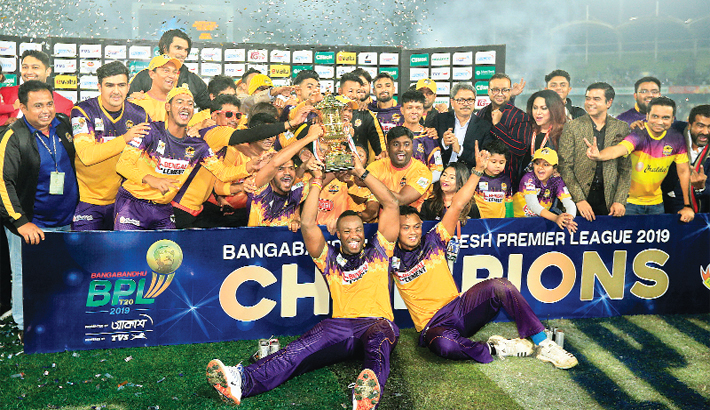 Players of Rajshahi Royals celebrate with the trophy of Bangabandhu Bangladesh Premier League at Sher-e-Bangla National Stadium in the capital on Friday. – Reaz Ahmed Sumon

Rajshahi Royals clinched the maiden trophy of the Bangabandhu Bangladesh Premier League by beating Khulna Tigers in the final at Sher-e-Bangla National Cricket Stadium in Dhaka on Friday.

Rajshahi Royals Captain Andre Russell made all-round performance in the game, propelling his team to the Bangabandhu BPL champions. He was adjudged the player of the match and the tournament.

In front of a capacity crowd, Rajshahi rode on a superb fifty of Irfan Shukkur, complementing well by the rapid knocks of Mohammad Nawaz and Andre Russell.

Khulna kept them flowing at most part of the game, but Rajshahi showed the desperateness to win the maiden trophy and came back in style overcoming all the odds to restrict the opponents to 149-8.

Shukkur struck 52 runs off 35 balls with six fours and two sixes that laid the platform, which latter utilized well by Nawaz and Russell.

Nawaz smashed a 20-ball 41 not out, clobbering six fours and two sixes while Russell hit an unbeaten 27 off 16, with three sixes, one of which against Mohammad Amir over deep midwicket was 115 metre long. That was comfortably the longest six of the tournament.

Rajshahi’s start was not as fluent as it should be in a pitch that was not entirely bowling-friendly.

Mohammad Amir got the better of opener Afif Hossain after he scored just 10. Liton Das and Shukkur shared 49 runs for the second wicket stand but that came at slower pace.

Shafiul Islam broke through with the wicket of Liton who made 25 off 28.

But, Shukkur completed his half-century before Amir came back to his second spell to dismiss him.

However Russell and Nawaz ensured the hard work of Shukkur wouldn’t be wasted as they came up with a bang to help Rajshahi reach a position that looked comfortable, considering the pressure of the final.

Amir claimed 2-35 while Frylinck and Shafiul picked up one wicket apiece.

Khulna’s inform openers—Nazmul Hossain Shanto and Mehidy Hasan Miraz failed to deliver in the most crucial game, leaving the side at perilous 11-2 in just second over.

Having blasted a 115 not out and 78 not out in the previous two games, Shanto was dismissed by Mohammad Irfan for naught in the second ball of the innings while Abu Jayed had Miraz caught by Shoaib Malik for 2.

Shamshur Rahman Shuvo and Rilee Rossouw responded well despite being in cornered situation. With the help of luck and pluck, they steadied the ship, combining for 74-run for the third wicket stand.

They were aided by some poor fielding of Rajshahi bowlers—Abu Jayed Rahi put down a simple catch of Rossouw at point when he was on 18, while there was numerous misfielding.

With the duo looking to take the match away, Mohammad Nawaz removed Rossouw for 26 ball-37 in which the South African recruit hit a six and a four.

Shamshur went on to complete his half-century and with captain Mushfiqur Rahim in the company, it looked anybody’s game still.

Kamrul Islam Rabbi, however, put Rajshahi on top, dealing a double strike that saw him dismissing Shuvo and Najbullah Zadran in the same over.

Shuvo smote four fours and two sixes in his 52 off 43 while Zadran made just 4.

Onus was on then captain Mushfiqur and Robbie Frylinck, who was not in form with the willow throughout the innings.

Mushfiqur still kept the Khulna fans interest with some big shots around the park but a searing Yorker of his opposite number Russell rattled him stump as he was on 21 off 15 with two fours and a six.

With the dismissal of Mushfiqur, Khulna’s hope to clinch the maiden trophy ruined completely.

Mohammad Irfan then got rid of Frylinck for 12 before Russell cleaned up the tail with an intriguing show of death bowling.

By being the champions, Rajshahi got the trophy worth BDT 20 lac. And with that the curtain of the 40-day long spectacle was brought down amid the fireworks.

Rajshahi Royals won the Bangabandhu Bangladesh Premier League (BBPL) trophy as they defeated Khulna Tigers by 21 runs in the final at Sher-e- Bangla National Stadium in the capital on Friday. There were few awards given away at the end of the tournament. Full list of awards and major statistics from the BBPL 2020

Player of the tournament - Andre Russell (225 runs with 14 wickets)

Player of the match - Andre Russell