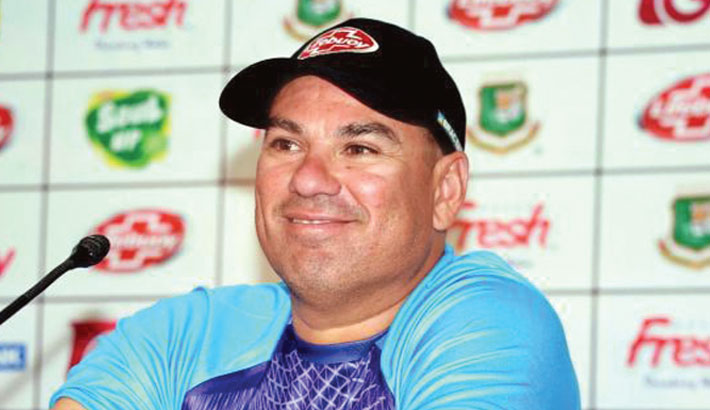 Bangladesh head coach Russell Domingo said that he is going to tour Pakistan with Tigers adding that his main mission is to develop a Test culture as well as to form squad with core group cricketers for the upcoming ICC T20 World Cup 2020.

Bangladesh Cricket Board (BCB) divided the tour to three different sections so that Tigers do not need to stay in Pakistan for a longer period of time.

Tigers will tour Pakistan first for a three-match T20I series in Lahore on January 24, 25 and 27. After that, Bangladesh will return home and again travel to Pakistan to play the first match of the two-match Test series, which is part of ICC World Test Championship fixture. First Test will take place in Rawalpindi from February 7.

Bangladesh will travel to Pakistan for the third time in April this year to play an ODI and the second Test of the series. The ODI will take place on April 3 and Second Test will commence on April 5.

“Since the board has allowed the team, I have no problem touring Pakistan,” he said adding that he is looking forward to make sure that the team is moving in the right direction in the coming days.

Domingo, who took the job of Bangladesh’s head coach at a difficult times after the ICC World Cup 2019, had a difficult start to his campaign as Tigers went down to Afghanistan in a home Test after Domingo took over, before they lost both the T20I and Test series in India.

Domingo believes that the tour to India was a learning curve for them.

“There’s no doubt that we have to learn from it. We were disappointing in the Tests as we are a better team than that. They challenged our batters throughout the series. It was a good learning curve for a lot of our players and coaches,” said Domingo.

“Playing against quality fast bowlers on wickets that offer a little bit highlighted how much work needed to be done with our batting line-up under those conditions. A lot of learning and reflection need to take place because we want to get better,” he said.

“We have to address certain issues and structural changes in our team that includes balancing our squad and maybe different personnel in certain positions,” he said.

“I think the main priority for us is to establish a Test culture and a Test style of cricket. It is a big challenge for this team,” he said adding that the incentive taken by BCB to increase the match fees of the Test players will certainly help to promote longer version cricket among the younger players.

Previously, the players were paid one lakh twenty five thousand for a T20I, two lakh taka for an ODI and three lakh fifty thousand taka for a Test.

“I see BCB have put a big emphasis on Test matches by raising the match fees. It is massive, not just for the Test players but also for the guys that are not in the Test side, to want to play Test cricket, to make sure they are not just focusing on leagues and T20s. Hopefully it will allow for some new players to come through the system,” he said.

Domingo said that it can be an opportunity for some cricketers to grab the spot that was created by the absence of Shakib Al Hasan as he will be unavailable due to the ban imposed on him by ICC for failing to report corrupt approaches by the bookies.

“We have a lot of batters in the team who can bowl. We are making sure that they execute and perform as well as Shakib did. So, I think we have got the resources to do it. The challenge is for the guys to perform as consistently as Shakib,” said Domingo.

Domingo said that he will be looking forward to see how he can give players more exposure in the T20 format considering he is eyeing to consolidate the T20 squad for the upcoming ICC T20 World Cup.

“If Naim will open for us in the ICC T20 World Cup, he has to open for us in all these games going forward to give him as much opportunity to develop and get experienced,” said Domingo,

“We want to start settling on a group of players from this series to the ICC T20 World Cup,” he concluded.