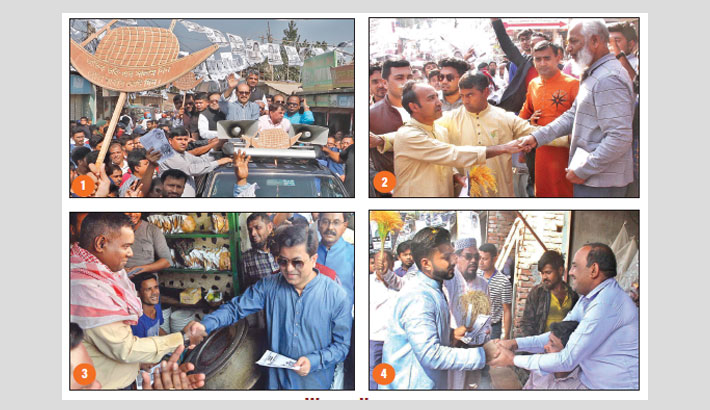 Mayoral candidates of Awami League and BNP are continuing hectic campaign for votes to win the Dhaka city elections.

The candidates for the January 30 elections to the Dhaka South and North City Corporations are giving different promises to win voters’ hearts.

They gave the promises while campaigning in different areas for votes in favour of their respective symbols -- ‘Boat’ and ‘Sheaf of Paddy’.

"I will dedicate myself at the service of the city people with whatever the city corporation has if I am elected as mayor of DNCC," he said while conducting campaign at Baunia in Mirpur on Friday.  Atiq reiterated that accountability of mayor and councillors will be ensured.

"Wealth statement of mayor and councilors will be published every year while a meeting will be held with residents of ward every month," he said.

Ishraq Hossain, BNP candidates for Dhaka South City Corporation, said services for city people will be ensured through returning ownership of the city corporation to its people if he elected.

"The country will be liberated again through preventing corruption. The ownership of the people will be returned to its people. All will cast their vote in favour of 'Sheaf of Paddy' to restore the voting rights and democratic rights of the people," he said.

Ishraq said due to the incumbent government negligence and corruption, Dhaka has lost its fitness for live dwelling.

Recently, the Dhaka city is also included in the list of the most unsafe city for women and children," he said adding, "Vote for 'Sheaf of Paddy' to make Dhaka as livable."

Meanwhile, AL DSCC aspirant Taposh said he is the only mayoral candidate who gave five-point vision for development of Dhaka city.

"Dhaka is our pride. We will make Dhaka developed and liveable by reviving its culture and tradition," he said while conducting campaign at Chwakbazar in the capital. The AL mayoral aspirant hopes that he will win the DSCC poll.

"People of the DSCC area responded spontaneously," he said adding that they have carried out campaign in accordance with the electioneering code of conduct.

Later, he went to Lalbagh, Bangshal and nearby areas to woo voter in favour of 'Boat' symbol.

BNP candidate for DNCC Tabith Awal said that he will ensure better Dhaka by ensuring all facilities for city people.

"Dhaka city has become ineligible for living. City people have been deprived from facilities including drainage and sewerage system. I will ensure better Dhaka if I am elected," he said while carrying out poll campaign at Sultana Razia road at Mohammadpur. Tabith said mass upsurge has been created in favour of 'Sheaf of Paddy' will lead him toward win in the January 30 polls.

Earlier, Tabith has started his election campaign from Mohammadpur bus stand. Besides, all the mayoral candidates have urged the Election Commission to defer the January 30 voting date as it is coincided with Saraswati Puja.

Meanwhile, the High Court turned down a writ petition calling for the polls to be rescheduled to another date as it coincided with Saraswati Puja.

Besides, EC said demand for deferment of city polls as “illogical” and there is no scope to reschedule the elections. The last elections to DSCC and DNCC were held in 2015 when Sayeed Khokon and Annisul Huq became mayors of DSCC and DNCC respectively.

Later, Atiqul became mayor as the DNCC mayoral post fell vacant after the death of mayor Annisul Huq on November 30, 2017.