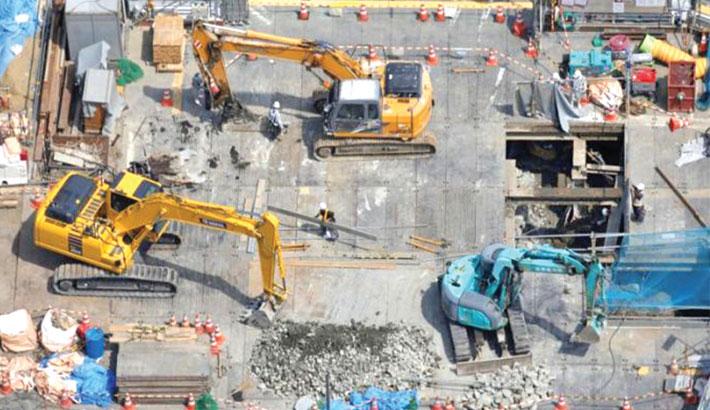 A worker is seen uploading a wood-slide at a construction side of Tokyo in Japan recently.

TOKYO: Japan’s core machinery orders jumped in November to post their biggest monthly expansion on record, in a positive sign for business spending which has helped sustain a fragile recovery in the world’s third-largest economy.

Cabinet Office data on Thursday showed that core orders, a highly volatile data series regarded as an indicator of capital spending in the coming six to nine months, rose 18.0 per cent in November from the previous month, report agencies.

That marked the biggest month-on-month gain since comparable data became available in 2005, and also was the first rise since June.

The jump in November orders was largely driven by big-ticket items, such as orders for railway cars. It compared with a 3.2 per cent gain seen by economists in a Reuters poll and more than recouped an unexpected 6.0 per cent drop in October.

“The surge in ‘core’ machinery orders in November was largely due to a spike in transport postal activities and we still expect non-residential investment to fall this year,” said Tom Learmouth, Japan economist at Capital Economics.

“Given that capital goods shipments probably fell sharply in Q4, we are still forecasting a sizeable 2.3 per cent quarter-on-quarter fall in non-residential investment last quarter,” he wrote in a note.

Capital expenditure has been a bright spot for the economy in the second and third quarter of last year as companies invested in equipment to prepare for a nationwide tax hike and overcome a tight labour market.

Japan’s economy grew at a faster pace than initially reported in July-September last year largely due to upgrades of business and consumer spending.

Many analysts expect the gross domestic product reading for the fourth quarter of 2019 due next month to show a contraction as a sales tax hike from October hit consumption, one of the economy’s main growth drivers.