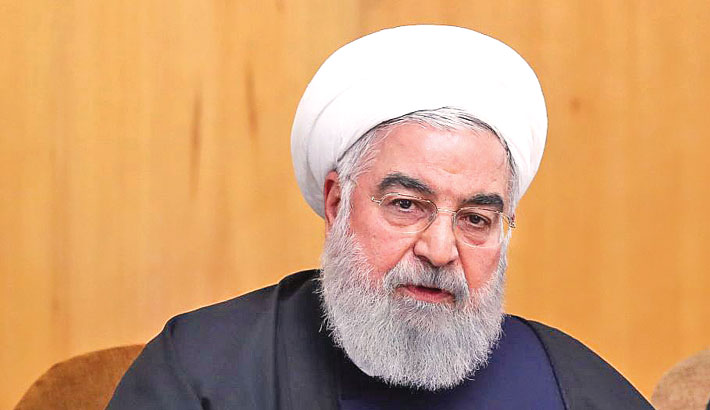 TEHRAN: Iran’s president said Thursday dialogue with the world was “possible” despite high tensions with the United States, and stressed that Tehran was working daily “to prevent military confrontation or war”, reports AFP.

Iran attacked the US military in Iraq on January 8 with missiles to retaliate against Washington’s targeted killing of a key Iranian general five days earlier in Baghdad, at a time when both are also locked in a bitter dispute over Iran’s nuclear programme.

“The government is working daily to prevent military confrontation or war,” President Hassan Rouhani said in a televised speech, adding that “for me this is a daily concern”.

The latest surge in tension has prompted calls for de-escalation from an international community that fears a wider conflagration in the Middle East, where the US has multiple allies and bases and Iran has proxies, especially in Iraq and Lebanon.

On Wednesday, Rouhani had said Iran’s missile launches against Iraqi bases used by the US armed forces had provided “compensation” for the death of General Qasem Soleimani, the architect of Iran’s Middle East military strategy.

In his speech on Thursday, Rouhani said that the Iranian retaliation — which caused significant material damage but no casualties according to the US military — had strengthened Iranian deterrence against the “threats” of President Donald Trump.

Rouhani, a moderate on his country’s political spectrum, also defended the policy of openness to the world that he has pursued since his first election in 2013, and which has come under fire from Iran’s ultra-conservatives.

He also defended the 2015 international agreement designed to limit Iran’s nuclear programme which has been in tatters since Trump unilaterally pulled out of it in 2018.

Rouhani said that with the nuclear deal “we have proven in practice that it is possible for us to interact with the world.”

“Of course, it’s difficult,” he acknowledged.

“They tell us: there are people you should not trust,” he said, referring to the rhetoric of Iranian ultra-conservatives about Europe and the United States.

“It’s true” the Iranian president said, adding that “if there were trustworthy people ... it would be simple and easy” while also referring to Trump as “an unpredictable man”.