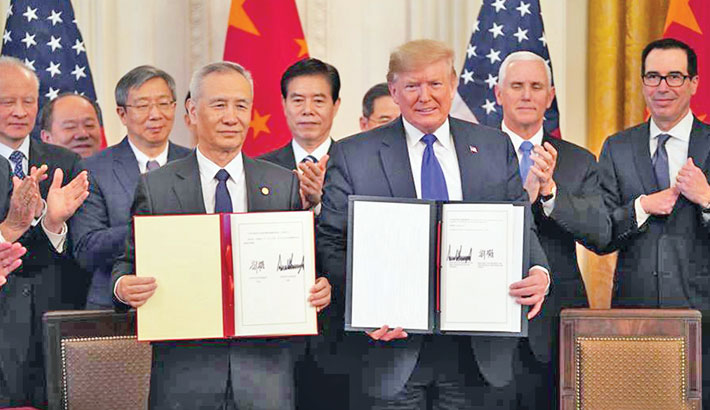 US President Donald Trump and Chinese Vice Premier Liu He, who is also a member of the Political Bureau of the Communist Party of China Central Committee and chief of the Chinese side of the China-US comprehensive economic dialogue, show the signed China-US phase-one economic and trade agreement during a ceremony at the East Room of the White House in Washington DC, the United States recently.

WASHINGTON: China and the United States formally signed their phase-one economic and trade agreement here on Wednesday, with Chinese Vice Premier Liu He and US President Donald Trump inking the papers in the White House.

Speaking at the signing ceremony, Liu, also a member of the Political Bureau of the Communist Party of China Central Committee and chief of the Chinese side of the China-U.S. comprehensive economic dialogue, first conveyed a message of Chinese President Xi Jinping to Trump, reports Xinhua.

The conclusion of the phase-one economic and trade agreement is good for China, for the United States and for the whole world, Xi said in the message read out by the vice premier.

“It also shows that our two countries have the ability to act on the basis of equality and mutual respect, and work through dialogue and consultation to properly handle and effectively resolve relevant issues,” read the message.

In the next step, the two sides need to implement the agreement in real earnest and optimize its positive impact, so as to make even greater progress in China-U.S. trade and economic cooperation, the Chinese president said.

To maintain healthy and steady growth of China-U.S. relations serves the interest of both countries and requires joint efforts from both sides, Xi said.

In that spirit, Xi voiced hope that the U.S. side will treat fairly Chinese companies and their regular economic, trade and investment activities, and give support to the collaboration between enterprises, research institutes, and schools and colleges of the two countries, as it will help enhance mutual trust and cooperation between the two sides.

“China is prepared to work with the United States in that direction. And I will stay in close touch with you personally,” Xi said. “I believe that under our guidance, China-U.S. relations will deliver more results and bring greater benefits to our peoples in the year ahead.”

The Chinese vice premier, in his remarks, called the agreement mutually beneficial and of win-win nature. “It will bring about stable economic growth, promote world peace and prosperity, and is in the interest of producers, consumers, and investors from both countries,” he said.

Liu noted that the phase-one deal is in line with the World Trade Organization (WTO) rules, and that it is neither directed at nor will affect the lawful rights and interests of any third party.

Liu expressed the hope that both sides will work together under the principle of equality and mutual respect, strictly honor the agreement, accommodate each other’s core concerns, and ensure a good implementation of the phase-one trade agreement.

“It is the pressing need and will also play an important role in the growth of bilateral economic and trade relations in the future,” he said.

Speaking of the Chinese economy, Liu pointed out that it is transitioning from high-speed growth to high-quality development while a massive domestic market is taking shape.

China welcomes investors from around the world, including those from the United States, and will expand the import of quality products and services from countries around the world, he said, adding that China will open further to the world.