‘I will celebrate after the final’ 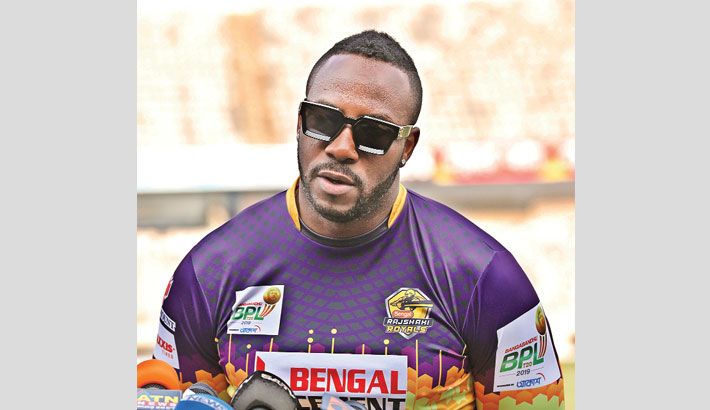 Rajshahi Royals West Indian all-rounder Andre Russell said on Wednesday that he is not in a hurry to party now as he wants to celebrate after clinching the Bangabandhu Bangladesh Premier League.

Russell’s sensational unbeaten 22 ball-54 helped Rajshahi script a thrilling two-wicket victory over Chattogram Challengers in the second Qualifier game which propelled them to the final of BBPL.

Captain Russell came up with all guns blazing to rescue the side from a hopeless situation as Rajshahi reached the winning target with four balls to spare.

In his match-winning knock, Russell smashed 2 fours and 7 sixes, last of which sealed the deal.

Rajshahi will take on Khulna Tigers in the final today, which will also be their chance to take the revenge of their defeat in the first Qualifier.

“I wish there were clubs to celebrate but I am in no hurry because we have an important game in two days’ time and I will celebrate after that game,” Russell told reporters after the match who added that he get all the energy of hitting those big sixes just by having fruits and coconut water.

Russell said that despite their loss to Khulna Tigers in the first qualifier, they are not losing hope as it will be new day altogether more so after they clinched the win from the claws of defeat.

“There is nothing else in our mind apart from winning (the final). We played last night as a team and we showed what we can do and hope that we can put on a good show tomorrow (Friday) night,” said Russell.

“Well, we will not be looking at any individual player as we are just going to try and get wickets all time. You never know who it might be,” he said.

“If it’s their day and you cannot stop them as they have a lot of match-winners. We are not going to plan for one or two players,” he said.

“We are going to plan for the entire team, both batting and bowling. We are going to make sure that we plan properly and execute those plans,” he added.

Russell added that he is confident that Afif Hossain and Liton Das, who had been the backbone of their batting unit, will deliver in the vital game.

“I think Afif and Liton are really doing a good job for us. They struggled in the last game but I am not going to say that they are down and out,” said Russell.

“They are going to give us the start we really need. We know we struggled against these guys () couple of nights ago,” he said.

“Let’s hope we can do well. I know everybody is pumped and we are ready to give a good show,” he said.