Will it finally be Mushy’s turn? 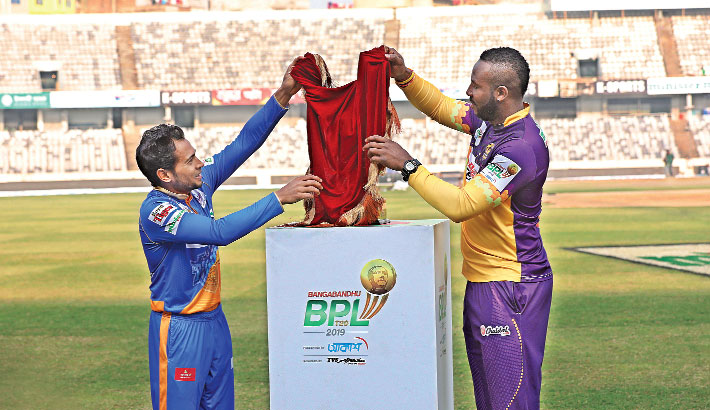 Can Khulna Tigers skipper Mushfiqur Rahim end his Bangabandhu Bangladesh Premier League (BBPL) title drought? This is the question that is making the rounds as he prepares to lead Khulna Tigers against Rajshahi Royals in the final of the tournament at Sher-e-Bangla National Cricket Stadium in the capital today.

Neither Khulna nor Rajshahi had the chance to take the trophy to their tent in the previous six editions of the tournament.

While Rajshahi opted not to have any practice sessions ahead of the final, their opponents looked not ready to follow the same path as they had a full training session at BCB Academy Premises on Thursday.

It looked Mushfiqur could not wait to have the first glimpse of BBPL Cup which arrived from London on Thursday afternoon.

Unlike the previous editions there will be no prize money for the participant teams in BPL and according to the organisers it looked not to be any issue at all.

“Yes, there is no prize money in this edition of BBPL as we did not have any franchises. We did not take any franchise fees so whom will we give the prize money to because there are only sponsors in the ongoing BBPL,” BPL’s member secretary Ismail Haider Mallick told daily sun.

Whether there is any prize money or not it hardly looked to be an issue for the participating teams as both the finalist looks adamant to clinch the championship.

Royals skipper Andre Russell believes that winning the toss will be important while praised the grounds men for consistently preparing batting friendly wickets in the competition as that was not the case earlier.

“Well the toss is important. But as you see, what happened when we played them (Khulna) a couple of nights ago, they batted first and put the runs on the board and the pressure kind of put us in the back foot. We kept losing wickets when we were chasing a decent target so if we bat first tomorrow (Friday), we have to try and get over 170 runs. We have no control once that coin goes up in the air. Just have to hope that it falls on the side that you called so let’s see what happens,” Russell told reporters ahead of the final.

“I think we have been getting some very good wickets. Credits to the grounds men, they have been doing an excellent job. Few years ago, I can remember the new ball spinning and turning big and that’s not good for the cricket,” he said.

“We have been seeing some good cricketing wicket. It’s not just for fast bowlers or spinners or for batters. Everyone can get good results once you put the balls in the right areas and apply yourself with the bat,” he said adding that he is used to taking pressure.

“I am accustomed to pressure. Batting under pressure and bowling in pressure moments. So, this is just an added pressure to me and I am learning as well and just trying to be the best I can be every game I play and lead these guys,” he said.

Khulna Tigers head coach James Foster said that they are not taking anything for granted.

“We had a very good match against Rajshahi the other day. It was a lot closer than it looked due to the way Shoaib Malik played. They are a very good team and we have to play very well tomorrow (Friday ) to beat them,” said Foster.

“We prepared as well as we possibly can and are very confident. We won our last four matches. They all were pretty much knockout games for us. We are in a good rhythm and in good pace,” he said.

“Ultimately it’s going to be delivering on the day which will matter. We have plans for every one of their squad members because that’s what we do every time,” he concluded.