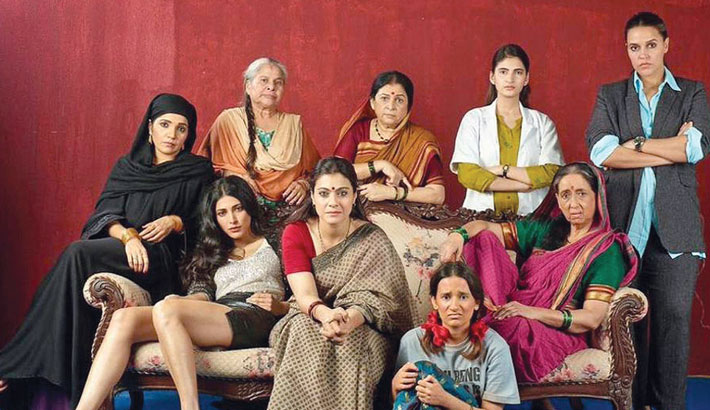 Kajol made a remarkable comeback with Tanhaji: The Unsung Warrior, in which she plays Tanaji Malusare’s wife Savitribai Malusare. The actor has another powerful short film in the lineup, Devi. The first look of the entire female starcast of the film has been revealed and shows Kajol in an impressive sari-clad avatar, reports Hindustan Times.

The picture shows Kajol sitting at the centre in a cotton sari looking intently at the camera. She is seen sharing the couch with a tipsy Shruti Haasan on the left and Neena Kulkarni sitting comfortably on the right with a worried expression. Neha Dhupia is seen standing confidently on the right in a pantsuit. Actor Yashaswini Dayama is seen sitting on the floor in a skirt-top and her hair in plaits. She, too, looks terrified. The picture also shows Mukta Barve leaning on to the couch in a burka, Sandhya Mhatre standing behind Kajol in an orange sari, Shivani Raghuvanshi is seen in a lab coat and Rama Joshi is standing extreme left in a salwar-suit.

The film is being directed by Priyanka Banerjee and produced by Electric Apples Entertainment.

Speaking about her debut in short film genre, Kajol told Mid Day, “I couldn’t have chosen a better subject for my first short film. My character, Jyoti, is vastly different from me, but uncannily, we share a lot of similarities. In today’s times when gender discrimination, abuse and violence is being spoken about vociferously, films like Devi are far more relevant.”

Shruti further said, “We talk about sisterhood and how women need to stand with each other. Devi highlights that aspect with a powerful message.”

Meanwhile, Kajol’s Tanhaji The Unsung Warrior has crossed the Rs 100 crore mark in six days of its release. The film has been declared tax free in Uttar Pradesh and Haryana. Directed by Om Raut, the film is set in the 17th century and is based on the life of Tanaji, the military leader of Maratha king Chhatrapati Shivaji Maharaj’s army.

Kajol had said in one of the interviews that she felt responsible towards her role as there was no reference point to play Savitiribai. She said, “The sense of responsibility for this particular character was that I had no reference point. I couldn’t compare her to anybody. The responsibility, as an actor, lies with me, because I have to convince myself that what I’m doing is the right thing. That was a task.”