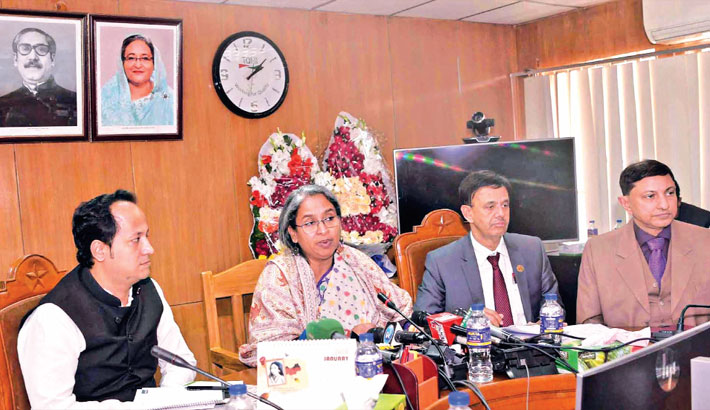 Education Minister Dipu Moni briefs reporters on SSC and equivalent examinations at the Secretariat in the capital on Thursday. —SUN PHOTO

Over 2m students to sit for exams from Feb 1

All coaching centres across the country will remain shut for a month from January 25 in a bid to prevent question paper leak during SSC and equivalent examinations scheduled to begin on February 1.

Education Minister Dr Dipu Moni made the announcement at a press conference on Thursday after a meeting of the National Monitoring Committee of the Education Ministry.

“All types of coaching centres will remain closed from January 25 to February 25 ahead of the public exams to prevent question paper leak,” she said.

The minister said, “None will be allowed to use mobile phone except the secretary of the test centres during exams, but the secretary can only use feature phones.”

She also instructed the candidates to enter their respective exam halls half an hour before the tests begin, or else they would not be allowed to sit for the test.

Of the candidates, a total of 16,35,240 students will sit for the SSC exams under nine general education boards, 2,81,254 for Dakhil exams under Madrasah Education Board and 1,31,285 for vocational exam under Bangladesh Technical Education Board this year.

Besides, 342 students will take part in the examination from abroad this year.

The exams are scheduled to begin on February 1. The theoretical parts of the tests will end on February 25, which will be followed by practical tests till March 3.