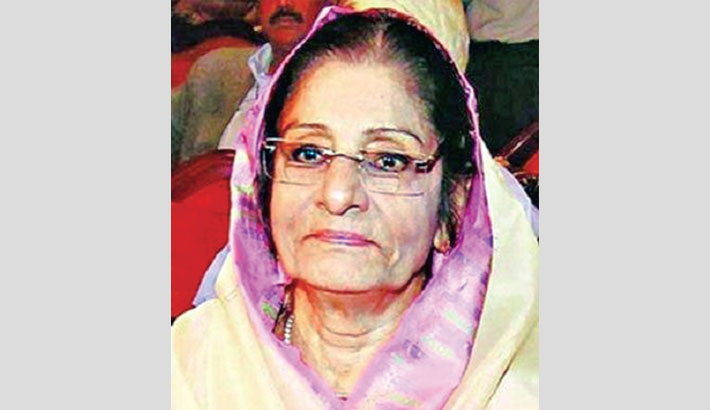 The internal conflict in Jatiya Party has resurfaced as its newly elected chief patron Raushan Ershad is trying to exercise organisational power in the party through her own people.

Raushan Ershad, also the leader of the opposition in the parliament, in a letter signed by her on January 13, appointed 16 leaders to the new committee of the party.

Raushan made her son Rahgir Al-Mahe Ershad, alias Saad Ershad, as the co-chairmen of the party.

About Raushan Ershad’s letter, Jatiya Party secretary general Moshiur Rahman Ranga told daily sun, “Raushan Ershad, as the chief patron of the party, has given a letter of requirement to the party chairman for appointing some leaders to some key posts.”

He further said JP Chairman GM Quader has already received the letter and will decide on it after discussing the issue with other co-chairmen.

However, GM Quader said except JP chairman’s consent, Rausha Ershad has no organisational capacity to appoint anyone to any level of the party’s committee.

“Raushan Ershad is our respected leader. But she has no organisational power in the party as the chief patron. Being misguided by some people, she is giving such organisational decision to appoint some to the central committee,” Jatiya Party co-chairman Syed Abu Hossain Babla told daily sun.

The party insiders said Raushan Ershad is unhappy with GM Quader for not including many of her men in the newly formed JP central executive committee while Saad Ershad was also not included in the party’s top post.

She is now trying to exercise her organisational power to include her men in the new committee of the Jatiya Party and at the same time she also wants to play an organisational role, sources said.

Talking to daily sun seeking anonymity, a presidium member of Jatiya Party who is pro-Raushan leader said if GM Quader does not accept Raushan Ershad’s organi sational directive of appointing the 16 leaders including Saad Ershad in the new committee, then she may go for counter action.

“Even she may announce a separate central committee of the Jatiya Party or may declare GM Quader as persona non grata in the party,” he added.

In 9th council of Jatiya Party, Raushan Ershad has been made as its chief patron in December last while she is actually ‘tooth less tiger’ in the party as she belongs to no organisational power which has made the widow of Ershad as well as her people seriously unhappy, party sources said.

“Actually, GM Quader, younger brother of Ershad, has made Raushan meaningless through electing her as the chief patron of the party,” a central leader of the JP said.

The party insiders further said the long-standing internal conflict between GM Quader and Raushan Ershad over supremacy in the party has resurfaced and it may take a serious turn if any further understanding between the two sides does not take place immediately.

Raushan Ershad now actually wants to establish her son Saad Ershad in Jatiya Party and expects him as the future chief of the party.

She is unhappy as she expected to become the chairman of the party in its council session, but finally Ershad’s younger brother GM Quader was elected to the top post and Raushan made as the ‘chief patron’.

“Let’s see what happens. Jatiya Party chairman may convene meeting of the party’s co-chairmen to take decision about Raushan Ershad’s directives. If he does not take any positive decision, then time will say what will happen,” Jatiya Party former presidium member Khaled Akhter told daily sun.

Raushan and her son Saad Ershad skipped the Jatiya Party’s council session. Since then, Raushan and Saad are staying away from the party activities, sources added.

The party sources said Raushan would enjoy the highest honour in all general meetings and other programmes of the party as its ‘chief patron’ and she would remain in the post as long as she lives. But the Jatiya Party’s supreme power would remain in the hands of GM Quader.

After the demise of HM Ershad on July 14 last year, both Raushan Ershad and GM Quader were at loggerheads over who would become the Jatiya Party chairman and leader of the opposition.

On May 4, 2019, Ershad at an urgent press conference at his Baridhara residence in the capital announced the name of his younger brother GM Quader as the acting chairman of Jatiya Party, and said GM Quader would become the chairman of the party in his absence.

Factions of Raushan and GM Quader, after several meetings in September the same year, came to an understanding that Quader would remain the chairman, while Raushan would be the opposition leader.

Though the party has survived a major split by electing Raushan Ershad as the leader of the opposition and declaring the date of party’s council session, it was temporary as the party’s two big groups are not united yet, and are working to gain support for their sides, Jatiya Party sources said.