Work to expand exports to Mideast 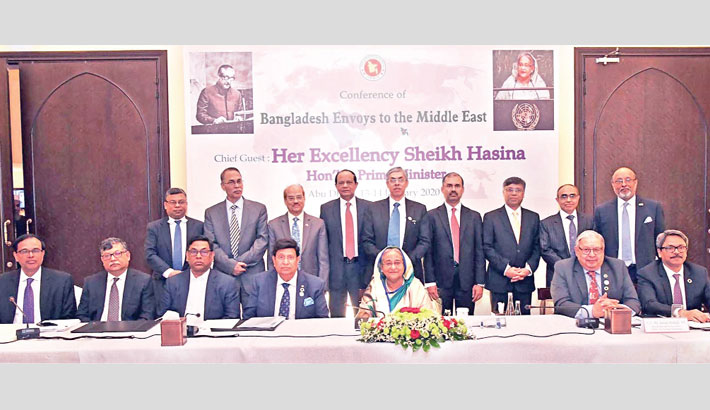 Bangladesh ambassadors in the Middle Eastern countries pose for a photo with Prime Minister Sheikh Hasina at a conference in United Arab Emirates (UAE) on Monday night. —PID photo

“In the case of investment and export, you’ll have to assess which country has what kind of demand. You’ll have to decide and proceed accordingly,” she said pointing at the envoys deployed in nine Middle East countries.

The Prime Minister was speaking at the Envoys’ Conference at Shangri-la Hotel in Abu Dhab, UAE on Monday.

Noting that Bangladesh receives the largest share of remittance from the Middle East countries, the Prime Minister asked the diplomats to work in a way so that Bangladeshi workers do not fall in trouble in foreign lands.

She emphasised carrying out campaign in villages so that overseas jobseekers do not fall victims to deception of middlemen and no one has to give additional money for going abroad. “We all will have to work for that,” she said.

Sheikh Hasina asked the envoys to strengthen the relations of Bangladesh with the Muslim countries.

Once Bangladesh had to take loans from donors, but the country has come out from that situation now. “So, they (the donors) are now our development partners,” she said.

Mentioning that Father of the Nation Bangabandhu Sheikh Mujibur Rahman adopted the foreign policy that friendship to all, malice to none, she said it creates misunderstanding between friendly countries in some cases, but it will have to be settled through discussions.

About the ongoing drive against terrorism and militancy, the PM said Bangladesh curbed the menace with its own mechanism. “It (the drive) will continue,” she added.

Hasina said Bangladesh has added new aircraft to the fleet of Biman Bangladesh Airlines as the country’s economy has become strong thanks to the contribution made by the expatriates, particularly those staying in the Middle East.

Talking about poverty, she said her government brought down the poverty rate to 20 percent and now wants to reduce it by three percent further.

Turning to the celebrations of Mujib Borsho (from March 17, 2020 to March 26, 2021), Hasina said many programmes have been chalked out to celebrate it in the country.

She  asked the envoys to take programmes to observe the Mujib Borsho in foreign lands and contact the foreign governments to this end.

Hasina said another book authored by Bangabandhu Sheikh Mujibur Rahman is going to be published with title “Amar Dekha Naya Chin” ( The  New China as I Saw).