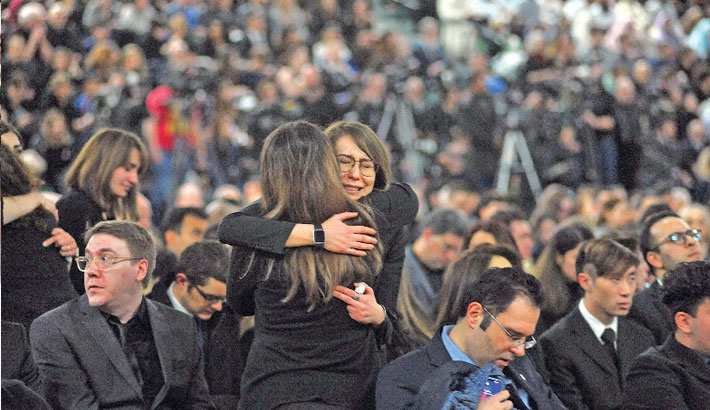 Mourners console each other as they gather at a memorial service for the victims of Ukrainian Airlines flight PS752 crash in Iran at the Saville Community Sports Centre in Edmonton, Canada on Sunday. —AFP PHOTO

TORONTO: Thousands of people attended vigils Sunday in Canada for the 57 Canadian victims of the Ukrainian airliner crash in Iran, most of them from the Iranian community, reports AFP.

Prime Minister Justin Trudeau told a memorial event in Edmonton that “this tragedy struck our Iranian-Canadian community, leaving cities like Edmonton reeling, but this was truly a Canadian tragedy.”

Six university students were killed when the Ukraine International Airlines flight crashed on January 8, shortly after takeoff from Tehran’s airport.

All 176 people aboard were killed, 57 of whom were Canadian, many of them dual Iranian nationals.

Iran has since admitted the airliner was mistakenly shot down by Iranian missiles.

At a ceremony at the University of Toronto, many of those who had been close to the victims expressed their grief and anger.

“It’s a story that resonates with the people, these immigrants with a lot of hopes and dreams. They worked super hard, they were high achievers and they get here only to be shot down in the middle of the air,” said Ali Esnaashani.

“I’m angry, I’m sad,” the 30-year-old told AFP. “But I also feel inspired to see the community come together like this.”

On stage, Mehrdad Ariannejad, head of the Canadian-Iranian cultural dialogue nonprofit Tirgan, began to cry during his speech.

“Shock has given way to grief and increasingly anger,” he said.

“We must demand justice from the Islamic Republic authorities and demand answers and compensation for the negligence and lack of regard for human life that has led to this tragedy.”

Canada is home to a major Iranian diaspora. In 2016, 210,000 Canadians claimed Iranian origins, according to official figures.

Half of them live in Toronto, which has one of the most significant Iranian communities in North America after Los Angeles.

Hola, 50, who knew one of the victims, could not hold back her tears. “I’m happy that the Canadian government promised to follow through and find justice for these people, for the families and loved ones,” she said.

“Nothing will ever replace these brilliant lives that have been cut short,” said Deputy Prime Minister Chrystia Freeland in Toronto. “We will always bear these scars.”