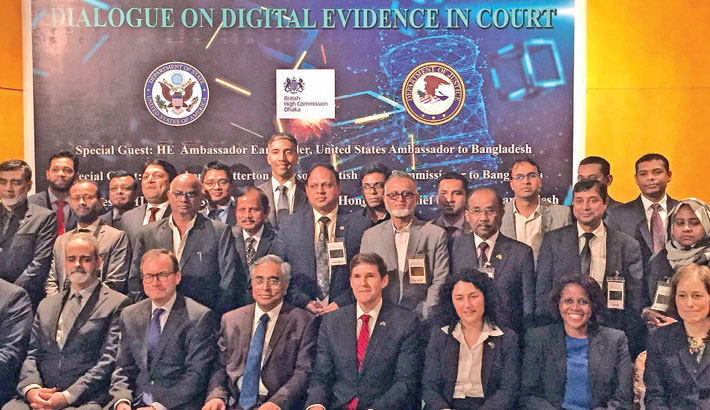 Chief Justice Syed Mahmud Hossain along with dignitaries poses for a photograph on the opening day of a four-day workshop styled ‘Dialogue on the Use of Digital Evidence in Court’ in the city on Monday. —SUN PHOTO

Chief Justice Syed Mahmud Hossain on Monday stressed the need for updating the century-old Evidence Act of 1872 by incorporating the provisions for using digital evidence as much of the communication and commercial activities are now done on digital platforms.

The 1872 Evidence Act is a great piece of law, but it needs to be updated to meet the challenges of 21st century when technology is changing rapidly and the government and private organizations are increasingly using digital technologies, said the chief justice.

“If we are able to overcome the challenges to introduce digital evidence in our justice system to a great extent, it will help assist the judges and investigation officers,” he added.

He was speaking at a four-day workshop styled “Dialogue on the Use of Digital Evidence in Court” began in the city in the aiming to enhance the efficiency and integrity of the administration of justice as well as help solve crimes more quickly and reduce backlog of cases.

The US-UK sponsored workshop, organized by the US Embassy in Dhaka through the US Department of Justice, will be conducted by two US Federal Judges and three Federal Prosecutors, a UK Criminal Justice Advisor and a Dhaka University law professor, said the US Embassy.

US Ambassador Miller in his speech noted there is widespread support in the Bangladeshi justice sector for using digital evidence as it would significantly increase the credible evidence available to prosecutors and judges, help solve crimes more quickly, and reduce backlog of cases.

British High Commissioner Chatterton Dickson expressed his support for the enhanced use of digital evidence in the Bangladesh justice system, noting that if used properly it can play a major role in increasing the efficiency and integrity of the administration of justice.