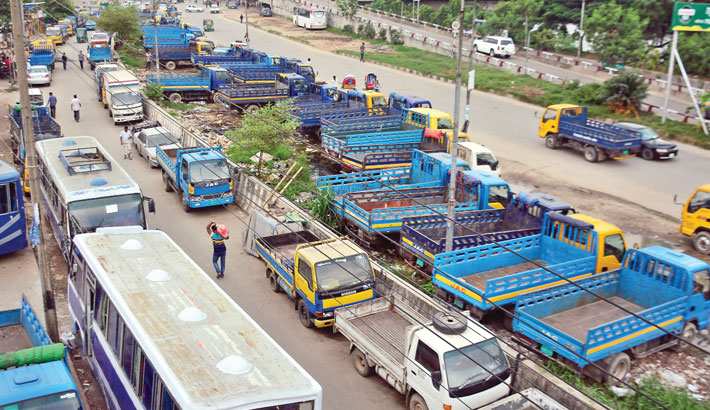 A large number of buses and trucks have been parked on a busy road leading to Kuril Biswa Road while a large portion of land belonging to Purbachal 300-feet road near Kuril flyover is being illegally used as parking. The authorities concerned are turning a blind eye to such illegal occupation. The photo was taken on Monday. — sun photo

Dhakaites have many woes, but the one that the overcrowded city is famous for both at home and abroad, is its nightmarish traffic caused mainly by chaotic as well as illegal parking on the roads and even on the pavements.

Drivers complain that they had little choice but to park illegal and in a scattered manner due to lack of designated parking places and traffic sense.

Parking of vehicles on the footpaths and on roadside spaces force pedestrians to walk on the road further worsening the nightmarish traffic.

The illegal parking on the pavements puts the pedestrians at risk as vehicles speedily pass by and has been blamed for many accidents.

Road spaces have shrunk due to illegal parking and create traffic congestion, with the situation is most chaotic near schools, markets, commercial areas and big shopping malls.

Assistant Prof Kazi Md Saifun Newaz of Accident Research Institute (ARI) at BUET told the Daily Sun that vehicle parking on roadside and footpath is great concern to the city dweller as it create traffic chaos and road accidents.

This correspondent found illegal parking by buses and trucks at the capitals busiest area at Kuril area blocking much of the road.

Increasing number of buses, trucks, private vehicles, motorcycles and some other vehicles find it difficult to park in designated spaces is not adequate in the capital city.

While visiting some other places this correspondent found that parking of private cars is also contributing severe traffic congestion on the city roads.

In the capital most of the multi-storied building, large commercial building, and residential, educational institute or any institutional building doesn’t have enough parking places for desired consumer or guest.

Most do not have adequate parking spaces for the desired vehicle using consumer, some business houses setup shops without providing parking that forces shoppers to park their vehicles on roads or on footpaths.

Many vehicles, mostly private cars, were also seen illegally parked on footpaths and roads in front of many government and private offices in different commercial areas including Motijheel, Purana Paltan, Arambagh and Kakrail.

It should made be made mandatory to build keep adequate spaces for parking in all multi-storey structures.

But, the city authorities have failed to maintain the process due to lack of proper monitoring and enforcement, said Altab Hossain, a bank employee at Banani in the capital.