Anti-tobacco law goes up in smoke in 71pc public hospitals 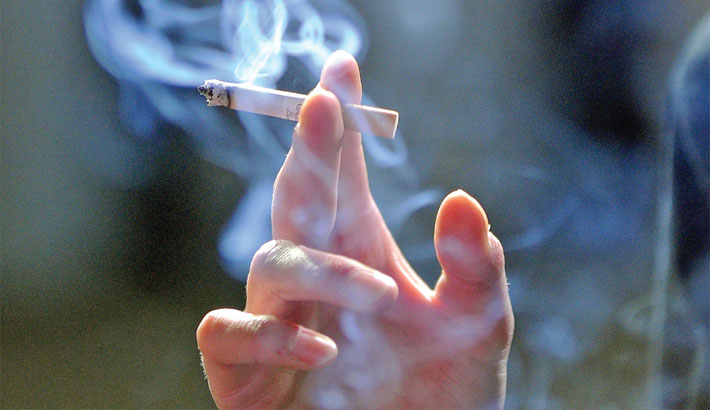 Despite a ban, one might detect the smell of cigarette or bidi in much as 71 percent of public hospitals in Dhaka as the law against the practice is simply smoked away due to lack of enforcement.

Under the Smoking and Tobacco Products Usage (Control) Act, smoking in hospitals is completely banned, but as in other cases a slack in enforcement has led it to widely ignored.

The evidence of smoking has been found in a survey conducted by the National Heart Foundation of Bangladesh (NHFB) to assess the implementation of the Act in all public hospitals in Dhaka  .

The survey report was presented at a seminar at the Jatiya Press Club in the capital on Monday.

The National Heart Foundation of Bangladesh organised the seminar with NHFB, while its president Brigadier (retd) Abdul Malik and the principal investigator of the survey Dr Sohel Reza Choudhury, professor and head of the Department of Epidemiology and Research at the NHFB were present. Khairul Abrar, program officer of the Anti-Tobacco Programme of the NHFB, presented the keynote paper.

The survey found smoking evidence such as cigarette butts and smell of tobacco smoke in 71 percent of public hospitals in Dhaka. Smoking was rampant in one-third of the hospitals.

Abrar said the survey was conducted in 51 hospitals in Dhaka. Smoking evidence was detected in nearly two-thirds of the hospitals, e-smoking was reported from almost half of hospitals (45 percent). According to the survey, tobacco products are sold within 100 metres of the 80 percent government hospital in Dhaka. “Even there are 18 percent hospitals, where tobacco products are sold within the hospital premises,” he added.

On the other hand, it is important to have a tobacco cessation clinic to assist patients and visitors to the hospital to quit tobacco. But only 2 percent of hospitals in the capital have the facility. Speaking at the programme, Dr. Habibe Millat MP said all hospitals must have anti-tobacco signage according to the tobacco control act and requested the DGHS to ensure the regulation immediately

He also requested the authorities concerned to take legal measures to stop the sale of tobacco within 100 metres of the hospitals.

Habibe Millat also announced to work with 100 MPs to reform the tobacco tax structure and increase it.

The speakers said tobacco products such as cigarettes and biri (locally made) do not only cause serious harm to the health of the consumers, but also to the people around them and is known as “passive smoking”  Indirect smoking can lead to lung cancer, heart disease, respiratory problems, stroke and reproductive problems. In the Global Adult Tobacco Survey (GATS) 2017, about 13 percent of people suffer from indirect smoking, even in important places like hospitals, they added. The speakers further said it is important for the authorities to be aware of keeping the hospitals’ tobacco free. Because, everyday a large number of patients and visitors from different parts of the country come to the hospital.

Besides, there are doctors, nurses, technicians and other officers and employees. To reduce the rate of tobacco use among health workers and to prevent the harmful effects of indirect smoking on patients and others, hospitals must remain tobacco-free.

If hospitals are 100 percent tobacco-free, there will be an increased tendency for doctors, officers, staff and incoming patients, visitors and others to refrain from tobacco, they said.