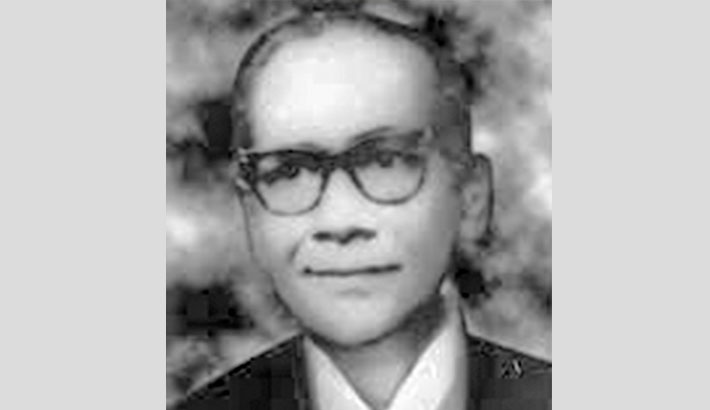 “I sometimes hold in half a sin,

To put into words the guilt I feel

And half conceal the soul within.”

I heard late Justice Murshed recite these lines of Alfred Lord Tennyson on an occasion when he suffered a personal bereavement. Yet today, after four decades of Murshed’s death, I find this verse still haunts me. It is difficult for me to put into words, the feelings evoked by these lines and the memory of the extraordinary brilliant man with whom I associate them.

Syed Mahbub Murshed was undoubtedly among the most striking public figures that appeared in our national scene. Born in 1911 in perhaps the most distinguished families of Muslim Bengal, he had showed signs of his vastly talented abilities from an early age. The late playwright and litterateur Prof Nural Momen, recalls in his essay the Precocity on the youthful Murshed in his Presidency College days at Calcutta. The great expectations he had aroused among his contemporaries stated late Dr Nobo Gopal Das ICS from his student days were subsequently materialised.

After a brilliant academic career both in the Subcontinent and England,.Syed Mahbub Murshed began his life career as a lawyer in the late thirties of last century, where he soon made his mark in the Calcutta Bar. His attachment to the Bar and to members of the legal profession lasted till the end of his days. Later on in life, while serving as a Chief Justice in the bench, he would talk nostalgically about the Bar. “The Bar” he said is my professional home, a place where I shall continually return; even when I am dead my disembodied soul shall hover around the precents of the Bar.” His affection for people of his his profession was deep. During his farewell speech from the bench after his premature retirement or resignation as Chief Justice while addressing the Bar to a standing ovation Murshed concluded his speech by stating “I salute you - you who were my erstwhile comrades, the members of the Bar.

In the later part of 1954 Mahbub Murshed was elevated to the bench of the High Court of the Eastern wing at Dhaka. As a judge, Justice Murshed remained committed to his lifelong ideals of liberty, justice and excellence. His judicial pronouncements, delivered as a High Court Judge and briefly in the Supreme Court and then as Chief Justice clearly reflected these ideals. Some of Justice Murshed’s judgements created constitutional history and not only won for him national fame but international acclaim. He will always be remembered in history for fearlessly upholding the rule of law. He remained a reflection of courage despite pressures from the highest quarters. As Chief Justice in a judgement he stated that “it is not the use but the abuse of Power that the Courts are meant to readdress.” Hence, he will remain a Titan in the judicial arena of South Asia for his landmark judgements. Not being a lawyer, I will not comment more, except I am told that Chief Justice Murshed are among the finest treatise in legal history and vastly quoted as references by lawyers not only in his native Bangladesh but also in other SAARC countries like Pakistan and India.

I would like to point out some other examples of Murshed’s manifold social cultural and political activities. A master in oratory Murshed would hold his audience spell bound whether written or speaking extempore he would captivate the listening gathering by his eloquent speeches. Being a humanitarian all his life the famine that griped Bengal in the early forties of the last century and the communal riots in 1946 moved him to found the Anjuman Mofidul Islam. As a sitting Judge in the fifties he worked relentlessly as Chairman of the Red Cross. Murshed also fought for our cultural freedom as he organised Tagore Century all over in what is now Bangladesh, despite the obstacles he faced from the then Pakistani military leadership.

In the political arena Murshed will remain unparalleled. As a young Barrister in 1942 Murshed’s article “Quo Vadis Quaid Quaid-e-Azam criticising Mr Jinnah and defending his uncle Mr Fazlul Haque that appeared in the “Statesman” of Calcutta created a stir in Bengal. After the partition of the Sub-continent in 1947 due to communal violence that spread Murshed was among the persons who put to motion the process that culminated in the Nehru-Liaquat pact. He was drawn into the vortex of the language movement and along with his uncle the Sher-e-Bangla broke section 144 in 1952.

In early 1954, just before becoming a Judge Murshed along with his Abul Mansoor Ahmed drafted the Manifesto for the Jukta Front government lead by his uncle. Again it was these two that put the final varnish to the six points which Sheikh Mujib fought and was jailed for. In the same year in 1966

Mazharul Haque Baki, the then President of the Chhatra League and Mr Serejul Alam Khan no one dared but Chief Justice Murshed to Chair their annual conference where Murshed also like Sheikh Mujib gave a clarion call for provisional autonomy.

On his resignation as Chief Justice among the first thing Murshed did was to organise the defense of the Agartala Conspiracy case. It is mainly on account of him that Sheikh MUjib did not have to come out on parole and all others were set free unconditionally. Murshed active participation in the mass upsurge in 1969 further earned him respect. It was his protest resignation as Chief Justice the public of both wings felt he was only acceptable candidate to run against President Ayub.

The agitation that Justice Murshed created with the then High Court Bar on account of the constitutional hiatus that prevailed went to such an extreme that no Judge was willing to give oath Gen Tikka Khan the Governor designate in March 1971. His refusal to collaborate with the Pakistani military authorities during our war of liberation is also recorded.

Another significant matter was during was during the Round Table Conference while President Ayub was virtually in his knees and in addition to the dissolution of the one unit in the western wing, Justice Murshed demanded one man one vote. Prior to this, in the National Assembly, there was a parity of 150 seats each for both the eastern and western wing. Since Murshed’s one man one vote was accepted, the eastern wing got 169 out of 300 seat. Thus he paved the way that who ever won the majority in the eastern wing would form the national government.

In 1977 he advised late Ziaur Rahman to form what is now SAARC. Hence Justice Murshed is living history. I can only conclude by saying about him the same passage he said about his uncle the She-e-Bangla, “In life and in death, he was a king without the trappings of a monarch, for he had built an empire in the hearts of his fellowmen.