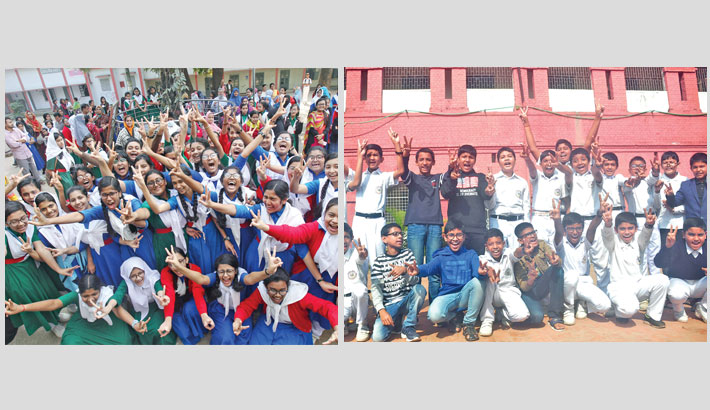 Jubilant students who came out successful in the JSC and PEC examinations celebrate the achievements at their respective schools on Tuesday. The photos were taken from Dr Khastagir Government Girls’ High School and Chattogram Collegiate School in the city. — SUN PHOTO

Female students did better result than the male ones marking a pass percentage of 83.05 against 82.79 of the male ones.

On the other hand, the number of hundred percent pass institutions is 102 this year.

A total of 3,091 students remained absent and four were expelled in the examinations this year.

In terms of GPA-5 achievers, Chattogram Collegiate School topped the list among the total 1,274 schools under the board.

Out of 343 examinees from this school, 293 got GPA-5 with hundred per cent pass rate.

The board Examination Controller Narayan Chandra Nath made the results public at a press conference at the education board on Tuesday noon.

He informed that the board results witnessed 1.41 percent rise in pass percentage compared to the previous occasion.

“We earlier instructed all the examiners to evaluate the answer scripts with highest sincerities in this year,” he said.

Regarding securing 7th position among all the boards in the country, the examination controller said bad results of students from three districts and rural areas of Chattogram are behind the situation.

The Controller Narayan informed that the number of GPA-5 achievers increased 810 this year and the number is 2.93 percent of the total passed students.

On the other hand, both pass percentage and the number of GPA-5 achievers decreased in the result of Primary Education Completion (PSC) examinations under the education board this year.

The pass percentage decreased by 1.19 percent this year compared to the previous occasion, added the education officer.