Nilsagor at Nilphamari: A Safe Sanctuary for Guest Birds 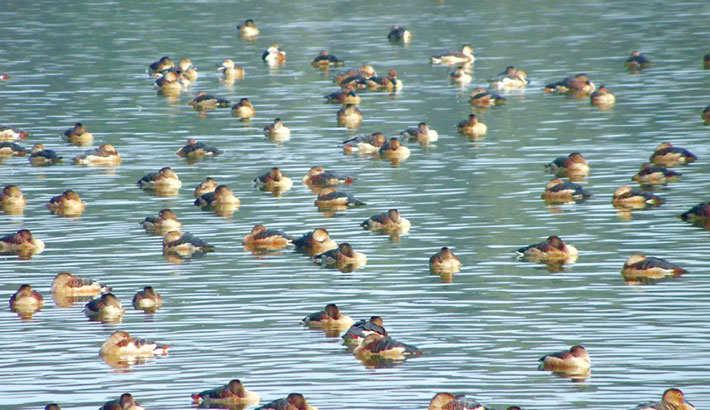 Winter is one of the most favourite seasons for most of the citizens of Bangladesh. This is because of the weather that remains soothing. In this period, hundreds of thousands birds from Siberia and other cold regions migrate to Bangladesh.

At the outset of winter, the guest birds flock here to escape the unbearable cold of Siberia as well as the Himalayas. They fly thousands of miles and finally make their temporary abode here. Here they get enough food to survive. 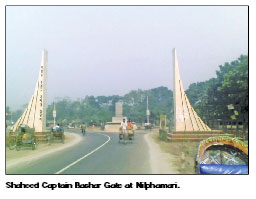 In the month of winter, Nilsagar, an enchanting water body located in Nilphamari district under Rangpur division, turns into a safe sanctuary for thousands of guest birds. In 1999, Nilsagar situated on 54 acres of land has been officially declared as a bird sanctuary, relevant sources said.

This winter, around 10,000 guest birds arrived at this safe haven of birds located at Dhobadanga village under Sadar upazila in the northern district, informed Nirmal Chakroborty, the caretaker of the sanctuary.

A large number of visitors have started coming here to enjoy this wonderful natural beauty. It seems the migratory birds are mesmerizing the visitors with their chirping and fluttering.

While mentioning about the reason of arrival of such a large number of guest birds, the caretaker revealed about existence of a special programme titled ‘Programme for Creating Natural Forest’ that was initiated by the district administration a couple of years ago. According to Nirmal, Kabir Bin Anwar, the Director General (DG-Admin) at the Prime Minister’s office, has inaugurated the project under which food and shelter are ensured to the birds. At the same time, a congenial atmosphere has been created for them.

Contacted, Nilphamari Additional Deputy Commissioner (ADC) Nahid Hasan said, “Because of the special initiative of the district administration, arrival of migratory birds increased tremendously at Nilsagor.” “The Ministry of Archaeology is also eager to develop the area as an archaeological site,” he added.

Every winter, Nilsagor wears a beautiful look with big and colourful water lilies and different types of migratory birds that start coming here since the beginning of November. The birds stay here till March-April every year.

According to a local historian, Md Nasiruddin, who wrote a book titled ‘Nilphamarir Itihas,’ the ancient name of  Nilsagor is Binna Dighi. In the 8th BC, the then Hindu king  Raja Virat, being instructed in a dream by the goddess, dug the water body and named it after his beloved daughter, Binnaboti, a sacred spot for Hindus. Muslims also maintained it as a sacred site.

Journalist Shamsul Islam, also a bird watcher and a resident of the area, said: “Arrival of migratory birds declined to 1000-2000  as several thousand century-old mother trees felled for developing the tourist spot causing scarcity of shelter and food for birds.

“There were numerous indigenous trees like Banyan, Black Berry, mango, jackfruit, Dumur, Kadam and others and many birds survived eating their fruits and took shelter on them at night, but due to random felling of trees, many birds disappeared,” he lamented.

“ Ignoring experts’ warning, the authority concerned planted saplings of foreign origin like ‘Shishu’, ‘Mahogany’, ‘Eucalyptus’ and others instead of local varieties which do not grow big having bushy branches that is needed for bird shelter and birds’ food,” he added.

Ornithologists warned that many birds even do not sit or rest on trees of foreign origin which are unfamiliar to them. But, their warning went unheeded resulting in decline in  birds here for the past few years. However, this year, a large number of guest birds flocked here.

Many visitors come from different parts of the country as well as from abroad. The district administration  has urged the tourists not to disturb the birds by throwing stones at them as they are boon for us and our eco-system.

Any tourist can travel to Nilphamari by train or bus from elsewhere in the country. For the tourists who want to visit from Dhaka, they can fly here by air. An airport is located at Sayeedpur, a railway city and a upazila centre, about 10 kilometres off the district town.  Available buses, including tourist buses will bring them to Nilphamari within half-an-hour. There are residential hotels as well as government Circuit House and Duk Bungalow in the town where tourists can stay comfortably.

On way to Nilphamari, visitors will pass by the Uttara Export Processing Zone (EPZ) before entering the district town. At the entrance of the town, a mammoth gate (Shaheed Captain Bashar Gate) has been built in memory of a martyred freedom fighter named Shaheed Captain R A M Khairul Bashar ASC, who is popularly known as Captain Bashar.  In 1971, He was the Officer Commanding of Station Supply Depot (SSD) at Chittagong (now Chattogram) Cantonment. A Baluch Regiment of the occupation Army of Pakistan first attacked Chittagong SSD to take its command from the hand of the Bengali Army officer. But Captain Bashar, also the eldest son of Asir Uddin Ahmed, the legendary first Muslim Headmaster of more than a  century-old  Nilphamari High English School (now Government Boys’ High School) successfully repulsed the attack along with his forces. This historic gate and its neighbourhood is also a popular tourist site. History of Bangladesh Liberation War unfolds here.