Cultural Heritage in Promotion of Tourism 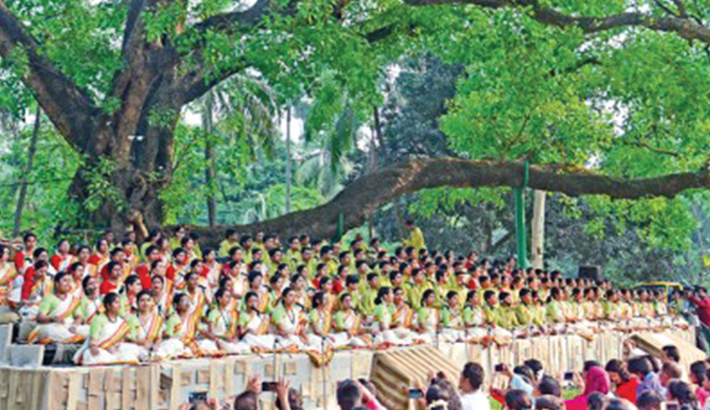 Bangladesh has been the cradle of civilisation, a centre of cultural diffusion since the dawn of the history of mankind. It was the meeting ground of various peoples in different states of civilisation, the most primitive as well as the most advanced. The cultural history of Bangladesh is one of the greatest and glorious heritages, which every Bangladeshi is legitimately proud of. Each phase of the history of Bangladesh has its distinct characteristics and every race of people who came and settled here, left its individual racial, religious or cultural impacts in the form of mosques, temples, stupas, monasteries, and spirituality along with their associated objects. Bangladesh is a country of diverse attractions, bountiful nature and friendly millions with more than a millennium of cultural heritage. The landscape of Bangladesh looks like a magical tapestry in green woven intricately by nature crisscrossed by a network of several major rivers and their numerous tributaries and canals. In fact, Bangladesh is the largest riverine delta in the world. The extensive river systems are, thus, fundamental to the country’s economy and the shaping of the people’s way of life. Bangladesh being a riverine country, most of the rural people is intricately intertwined with the rivers for their livelihood as well as mental attachment and recreation. The people produce different forms of traditional music — which are the popular folk songs – Jari, Shari, Bhatiali, Bhawai, Gambira et cetera. All these also come under the intangible cultural heritage. 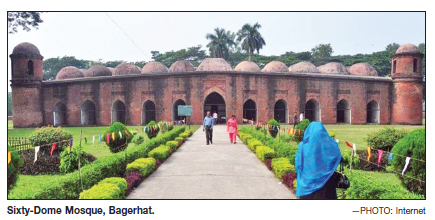 Intangible Heritages and Tourism in Bangladesh: Bangladesh is literally a multi-faced cultural collage. Its deep-rooted heritage is amply reflected in its architecture, literature, dance, drama, music and painting. Influenced by great religion-Islam, Hinduism, Buddhism and Christianity- Bangladesh has been a melting pot of diverse races and confluence of civilisations. Sculpture, tapestry, engravings are developing along the main stream contemporary art, drama, mainly of indigenous origin, has distinct feature of intangible heritage in Bangladesh. Pantomime, puppet, theatre, caricature, acrobatics and circuses have their own novelties under the intangible cultural heritage. Music in Bangladesh has developed through centuries along the three mainstreams-folk, modern and classical. Folk, Tribal and Classical are the prominent forms of dances, which also come under the intangible cultural heritage.

Fairs and festivals, both religious and social always play a significant role in the life of the people of Bangladesh. Pahela Baishakh (Bengali New Year’s Day), Independence Day, International Mother Language Day, Eid-ul-fitr, Eid-ul Azha, Durga Puja, Christmas and Buddha Purnima are a few of such occasions to mention. Besides these, various fairs and exhibitions are held throughout the country round the year, which also manifest robustly the intangible cultural heritage of the country.

Music in Bangladesh as an intangible cultural heritage can be divided into three distinct categories - classical, folk and modern. The classical music, both vocal and instrumental is rooted in the remote-past of the sub-continent. Ustad Alauddin Khan and Ustad Ayet Ali Khan are two names in classical instrumental music who are internationally known. The store of folk song abounds in spiritual lyrics of Lalan Shah, Hasan Raja, Romesh Shill and many anonymous lyricists. Bangla music arena is enriched with Jari, Shari, Bhatiali, Murshidi and other types of folk songs. Rabindra Sangeet and Nazrul Geeti are precious intangible cultural heritage of Bengalees. Modern music is also practiced widely. Contemporary patterns have more inclinations to west. Pop song and band groups are also popular in Dhaka city.

Bangladesh has a rich tradition of Art. Specimens of ancient terracotta and pottery show remarkable artistry. Modern painting was pioneered by 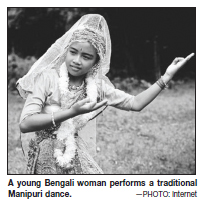 The earliest available specimen of Bengali Literature is about a thousand years old. During the mediaeval period, Bengali literature developed considerably with the patronage of Muslim rulers. Chandi Das, Daulat Kazi and Alaol are some of the famous poets of the period. The era of modern Bengali Literature began in the late nineteenth century. Rabindranath Tagore, the Nobel laureate, and National Poet Kazi Nazrul Islam played a pioneering role in creating the Bengalee culture. Michael Madhusudan Datta, Sarat Chandra Chattopadhaya, Mir Mosharraf Hossain and Kazi Ahdul Wadud also played their due role in promotion of Bengalee culture. So, these literary works are also a great contribution to the development of intangible cultural heritage in Bangladesh.

Providing information and passing on knowledge can be important ways for tourists’ satisfaction. Experiences say that intangible heritage is becoming a ‘learning arena’ for tourists, where they receive information through formal and informal communicative channels that are non-traditional and memorable. It could be for example, learning to dance, sing, make handicrafts and cook traditional meals and participating in different rites, 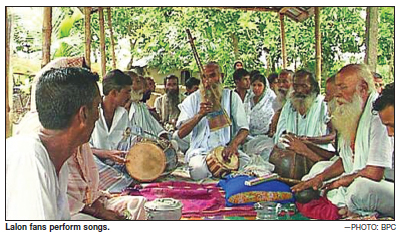 festivals and the like.  A common and often successful approach for presentation and sales of music, theaters, traditional folk songs, arts and crafts is development of integrated craft centres or “villages”. Therefore, we may develop plans to set up such type of centres or villages specially at Sonargaon or Kushtia Lalon Akhda – which has already been enlisted in the United Nations Educational, Scientific and Cultural Organisation (UNESCO) intangible heritage list.  These centres may be designed in the local traditional architectural style and install a large number of shops, snacks bars, restaurants and other tourist facilities, also demonstrate local arts and crafts production.

Traditional dance, music and drama performances of Bangladesh are also of much interest to many tourists. In this regard, some institutional trainning programmes to ensure high quality levels of performances may be arranged. Bangladesh, being a newly tourism-developed country, it should put forth best effort to find out the techniques for the management and marketing of its tourism at intangible cultural heritages and sites, with particular reference to mass destinations.

As the total enumeration of intangible heritage in the country is not yet completely done. Therefore, a comprehensive survey in seven divisions of Bangladesh such as Rajshahi, Khulna, Barishal, Rangpur, Sylhet, Chattogram and Dhaka may be carried out. We must know the total number and existence of intangible heritages and sites of various nature and dimensions.

Categorisation of intangible heritage, both living and non-living, is also necessary for their preservation and tourism promotion as well as involvement of local people. Categorisation may be done based on time period, spirituality, mysticism, locality etc.

Full implementation of UNESCO convention for preservation and conservation of intangible heritage is necessary which will ultimately benefit the tourism industry as well as the local community.

Many intangible cultural heritage of Bangladesh such as the visual and performing arts, crafts, traditional dress, ceremonies, architecture and life styles are being technologically developed, interpreted and managed. These are also significant aspects of the cultural heritage of a particular area of Bangladesh, which are being preserved for the benefit of residents. In many places, cultural traditions are being lost because of the influences of modern development generally. Cultural tourism based on intangible heritages can be an important vehicle for revitalizing and conserving, often on a selective basis, these cultural traditions because they are attractions for tourists.

Cultural tourism can also provide a market for the contemporary art of paintings and sculpture that are well developed in many places, often through university educational programmes of Bangladesh. Contemporary arts are being sold to tourists at art galleries located independently or in hotels and at special exhibits. Various sorts of arts and crafts exhibitions may regularly be held in different galleries, hotels, and motels of Bangladesh.

Intangible heritage is of vital importance to local communities. It is the community’s soul which unites its members, forms their character, demonstrates their achievements, differentiates them from others and keeps their uniqueness. Intangible heritage is an inseparable part of community identity and cultural heritage, and is the way of transmitting knowledge to younger generation.

For a country like Bangladesh where culture and tradition are unique, variant and having long historical background and significance, installation of adoptable technology is necessary for their conservation and preservation. Here local people should be consulted and their valuable opinions should be sought. In the whole planning process of intangible heritage for tourism development, community awareness and community involvement must be prioritised.

The following recommendations may be considered to be adopted for preservation and conservation of the intangible heritages in Bangladesh:

The writer is a tourism analyst and a writer who works at Bangladesh Parjatan Corporation (BPC).