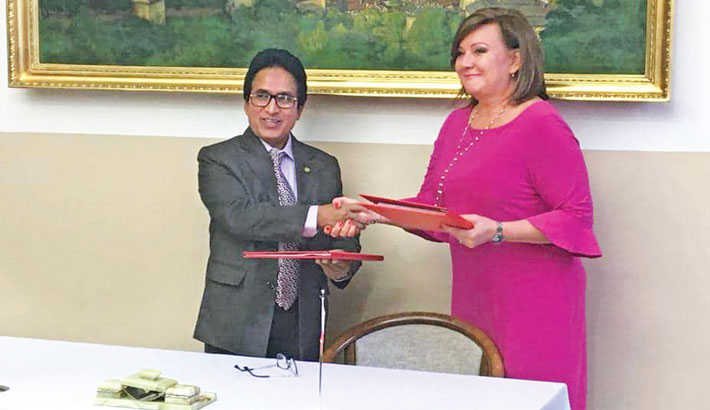 Bangladesh and the Czech Republic have signed a double taxation avoidance agreement (DTAA) to strengthen bilateral trade and investment ties between the two countries.

National Board of Revenue (NBR) Chairman Md Mosharraf Hossain Bhuiyan and Czech Deputy Prime Minister and Finance Minister Alena Schillerova inked the agreement on behalf of their respective sides at a function in Czech capital Prague on Wednesday, an official handout said.

Two deputy ministers of the Czech Republic and high officials of the ministry concerned were present at the DTA-signing ceremony.

The deal is the 36th DTAA treaty singed by Bangladesh to enhance bilateral cooperation and boosting investment.

According to the NBR chairman said, “The signing of a DTAA is necessary to expand trade and investment opportunities with other countries. The deal will make it easier for businesses in the Czech Republic to invest in Bangladesh.

“Similarly, Bangladeshi people will become more interested in investing in that country.”

Bangladesh has so far signed DTAA with 36 countries. Among them - India, Nepal, Pakistan and Sri Lanka are members of the South Asian Association for Regional Cooperation.