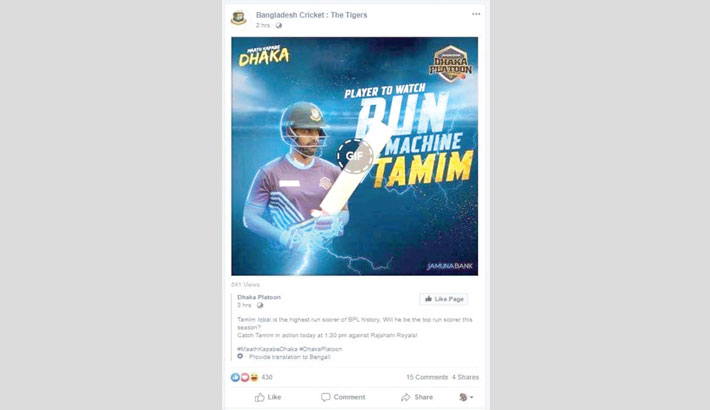 Dhaka Platoon, one of the seven teams taking part in the ongoing Bangabandhu Bangladesh Premier League, is taking extra promotional advantage from Bangladesh Cricket Board (BCB.

The allegation of promoting Platoon in the social media came up against BCB after they shared Platoon’s Facebook post featuring Mashrafe Mortaza and Mohammad Irfan and Tamim Iqbal’s GIF from Platoon’s official Facebook page.

As BCB did not do the same with other teams, it appears as such that BCB is even looking after the promotional activities of Dhaka Platoon.

Platoon are being sponsored by Jamuna Bank while BCB appointed Gazi Golam Mortaza as their team director who also happens to be a shareholder of the bank.

Despite the allegation of giving promotional advantage to Platoon, a BCB official said that there is no rule which restricts them from promoting any particular team of Bangabandhu BPL in social media.

“There’s nothing in the terms and conditions where it is stated that BCB cannot publish any promotional content of any particular team,” said the BCB official.

“Every team is part of BCB. We are following the same procedure for everyone,” he added.

Along with updating the social media platforms of BCB, Gazi Group, owned by the Gazi family, has been handling over the activities of BCB in social media. BCB’s Facebook page is handled by Content Matters Limited.