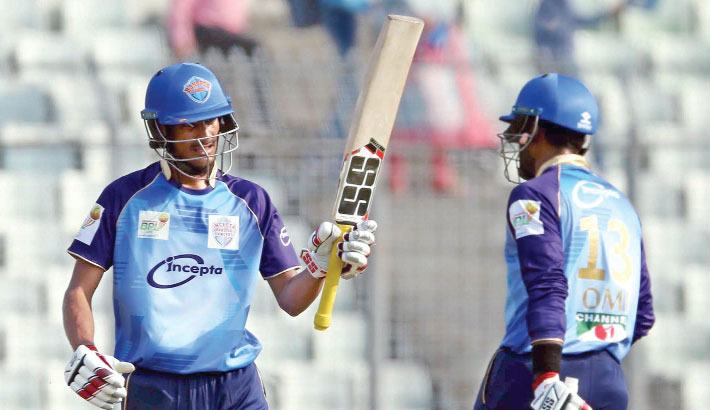 Naim, the promising opener, gave his side a decent total of 157 runs for 8 wickets when his colleagues failed to reciprocate his feat. However, it was not enough to stall Chattogram Challengers who rode on Chadwick Walton and Imrul Kayes to canter to the victory with 158 runs for 4 wickets in 18.2 overs.

Walton hammered 50 runs while Kayes stayed till the end to confirm the side’s victory with unbeaten 44 runs as Chattogram sealed their second victory in their third match of the tournament.

Walton and his fellow opener Avishka Fernando shared a 68-run partnership to give the side a decent platform. Lewis Gregory gave Rangpur the breakthrough, having dismissed Fernando for 37 runs but Walton got an able partner in Imrul Kayes to take the side closer.

Rangpur then got a glimmer of hope to bounce back in the match when they got the better of Chattogram captain Mahmudullah Riyad (15), who played his first match and Nasir Hossain for 3 runs.

Kayes remained unfazed by the fall of wickets around him and stayed till the end to win the game for the side. Kayes was not out on 44 runs off 33 balls with 3 fours and 2 sixes.

Being sent to bat first, Rangpur’s innings was all about the stellar effort of Naim Sheikh who amid the wickets tumbling around him kept the side in the hunt of a decent total.

“We were probably 20 runs short and ultimately had to pay for it,” he said.

“The wicket was very good so if we had posted a few more runs on the board it would have been a different story,” he said

His fellow opener Mohammad Shahzad was out on run-a-ball-9 and the middle order couldn’t survive the disciplined bowling of Chattogram bowlers, led by Kesrick Williams.

Naim struck 6 fours and 3 sixes in his 78 runs off 54 balls and was adjudged the man of the match despite being in the losing side. Mohammad Nabi was the other notable scorer for Rangpur with 12 ball-21 runs while Gregory made 11 runs.

Williams claimed 2 wickets for 35 runs to be the most successful bowler for Chattogram.

Rangers skipper Mahmudullah said that he is confident that this win will boost their team’s morale.

“I think as a team, we have performed really well. So I am really satisfied with the result,” said Mahmudullah.

“As we won two out of our three matches, I think it will give us confidence for the next matches. We will now play in Chattogram and it always provides good surfaces for Twenty20 cricket,” he said.