Akshay proves to be an ideal husband, gifts something precious to wife Twinkle 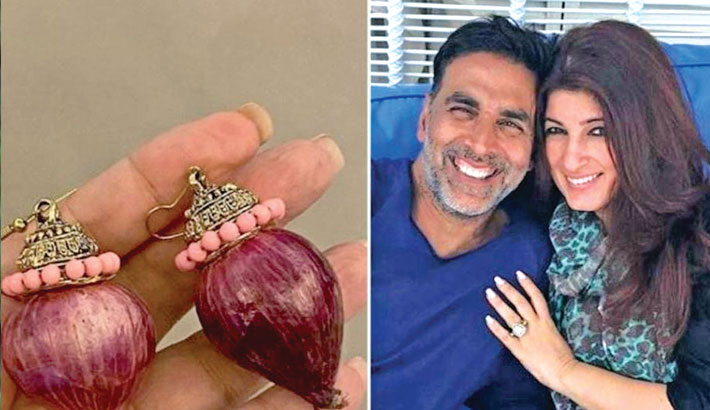 The inflating price of onions is known to all, and social media, given its swiftness and wit, has already started making memes. And the latest actor to have a hilarious take on the same is Akshay Kumar. What happened was that the actor graced the couch of The Kapil Sharma Show with the entire cast of his upcoming film, Good Newws, where the joke began, reports Mid-day.

And the joke was supposed to be on Kareena Kapoor Khan but ended up on his wife, Twinkle Khanna. And Khanna, with the pen name, Mrs. Funny Bones, took to her Instagram account to share this good news.

She wrote- My partner returns from performing at the Kapil Sharma show and says, ‘They were showing this to Kareena, I don’t think she was too impressed, but I knew you would enjoy them so I got them for you.’ Sometimes it’s the smallest things, the silliest things that can touch your heart.

Yes, the lucky wife just got onion earrings as a gift and she cannot stop smiling. It seems very soon, not diamonds, onions would be a woman’s best friend.  And that’s not all, she has even written a blog on how onions are the new avocados.

Well, Kumar and Khanna have always displayed their humour time and again on interviews and social media, and let’s see what hilarious take they have for us in the future.