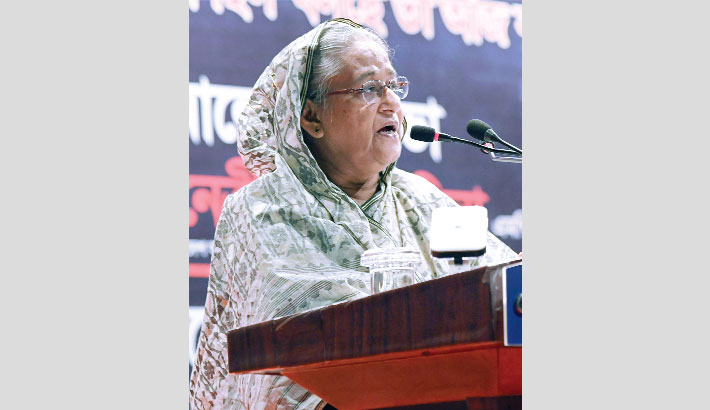 Prime Minister Sheikh Hasina on Saturday called upon all to remain alert to anti-liberation elements playing ducks and drakes with the fate of the countrymen.

“The countrymen have to take responsibility so that none can play ducks and drakes with their fate anymore in the future,” she told a discussion at Bangladesh Krishibid Institution in the capital.

The premier said traitors like Mir Zafar and Khandaker Moshtaque Ahmad were born on this soil and killers like Ziaur Rahman came to power.

“We’ve seen that traitors like Mir Jafar and Moshtaque were born on this soil time and again and killers like Zia came (to power) again and again,” she said, asking the future generation to remain aware of this.

The premier accused BNP founder Ziaur Rahman of his involvement in the killing of Bangabandhu, saying that he (Zia) was the most trusted person of Khandaker Moshtaque.

“Moshtaque promoted Ziaur Rahman to army chief as Zia was his most trusted person. If Zia was not involved in the Bangabandhu killing, why Khandaker Moshtaque made him army chief?” she posed a question.

Sheikh Hasina, also the president of the ruling Awami League, said Ziaur Rahman had been involved in killings, conspiracies as he killed many army officers, including those who were freedom fighters, following a series of coup attempts.

He had tried to erase the name of Father of the Nation Bangabandhu Sheikh Mujibur Rahman from history, fabricated history and misled people, she added.

“But no one can ever erase the truth…today it’s proved to the people of Bangladesh and the whole world. Today, the new generation of Bangladesh gets the scope to know the authentic history,” she added. Terming the 1974 famine a manmade one, the prime minister said then food secretary Abdul Momen, who later was inducted into the cabinet of Ziaur Rahman, had played the biggest behind-the-scene role in the famine.