Two in two for Rajshahi 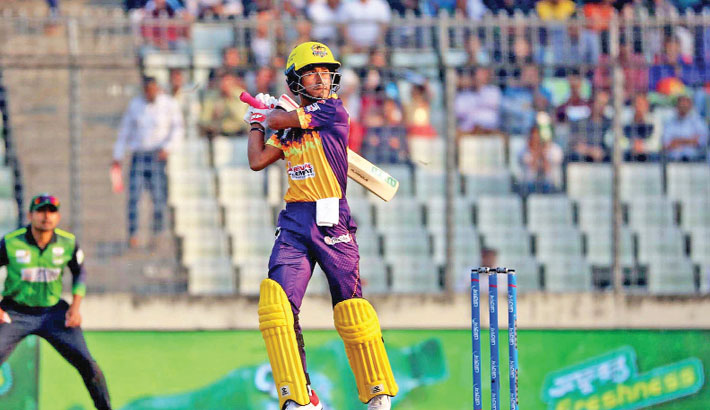 It seemed that Rajshahi Royals is making it into a habit of winning the game in a royal manner. After comprehensively crushing pre-tournament favourites Dhaka Platoon by 9 wickets in the opening game, they got the better of Sylhet Thunders in a show of impeccable team spirit.

The bowlers first did the job to perfection then batsmen took the responsibility to help the side secure an 8-wicket victory over Sylhet Thunders and made it two in two in Bangabandhu Bangladesh Premier League (BBPL) on Friday at Sher-e-Bangla National Cricket Stadium.

While it was Rajshahi’s second victory in a row, for Sylhet it was their second straight defeat, after having suffered a 5-wicket defeat to Chattogram Challengers in the first match.

This time Sylhet Thunders put up a worse performance than their first game as they were wrapped up for just 91 runs in 15.3 overs. For Rajshahi it was just a cake-walk as they reached the winning mark of 95 runs losing 2 wickets in just 10.5 overs.

Hazratullah Zazai who scripted the side’s victory against Dhaka Platoon this time got a third-ball duck, after being baffled by Nayeem Hasan’s straight delivery as Rajshahi started chasing. But his dismissal put no impact on the side as Liton Das kept the side in the hunt with free flowing batting.

Liton was unbeaten on 44 runs off 26 balls, sending the ball across the rope for 7 times and combined for a 62-run partnership with Afif Hossain for second wicket to take the side on the verge of victory.

Afif was dismissed after his 25 ball-30, studded by 3 fours.

Shoaib Malik then accompanied Liton in taking the side home. Malik was not out on 16 runs.

Nayeem Hasan and Naveen-ul-Haq took the two wickets of Rajshahi.

“This victory will enhance the confidence. In the last two matches, most of us didn’t get the opportunity to bat but everyone is ready to bat whenever the opportunity will come. Everyone is eager to do well. Our team is a confident team,” said man of the match Alok Kapali Kapali though was adjudged man of the match for his bowling performance, he termed himself as more of a batsman than bowler.

“In the last Dhaka Premier Division Cricket League, I did well with bowling but I am mainly a batsman first. When I bowl I try to bring in some value with my bowling also,” said Kapali. Kapali also heaped shower of praise on captain Andre Russell, a West Indies all-rounder who is leading a side outside of his country for the first time.

Earlier, being sent to bat first, Sylhet were never comfortable against Rajshahi bowlers who came up with disciplined bowling effort.

Leg-spinner Alok Kapali was key in Rajshahi’s bowling, claiming 3 wickets for 16 runs in three overs. He was ably supported by Ravi Bopara and Farhaz Reza who both snared 2 wickets in a miserly bowling show.

Captain Andre Russell made the first breakthrough for Rajshahi, dismissing Rony Talukdar for 19 runs after which Kapali ripped through the middle orders. Mohammad Mithun and captain Mosaddek Hossain made identical 20 runs to be the side’s highest scorers.