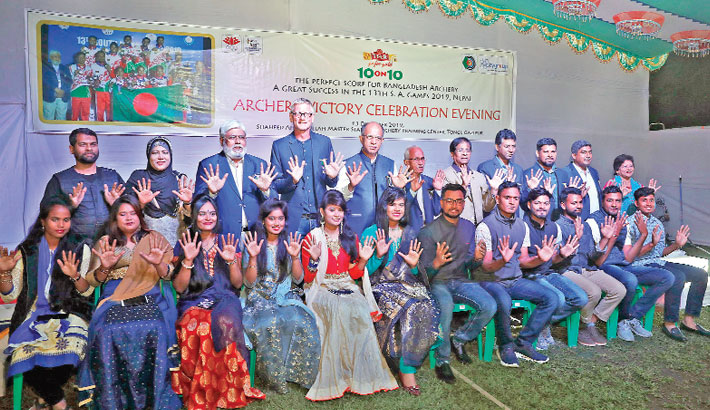 Bangladesh Archery Federation (BAF) on Friday accorded a warm reception to the archers team who pulled off a rare feat of bagging all ten gold medals in archery seven of the seven-nation 13th South Asian Games in Nepal concluded on December 10.

Bangladesh Archery team were also accorded a reception after their arrival at Hazrat Shahjalal International Airport in the capital on Wednesday whereas State Minister for Youth and Sports Zahid Ahsan Russell, MP, greeted them at the airport with flower bouquet along with Dhaka North City Corporation Mayor Atiqul Islam.

Bangladeshi archers made history clinching all ten gold medals in offer in the event.

Archer Eti Khatun emerged as the first Bangladesh women’s athlete to earn three gold medals in a single edition of SA Games (previously known as SAF Games) by clinching two gold medals in team event and one in the singles of recurve division.

Country’s celebrated archer Mohammad Ruman Shana, who qualified for the Tokyo Olympics’2020 directly, emerged as the 2nd Bangladeshi athlete securing three recurve gold medals in a single edition of the games after swimmer Mosharraf Hossain Khan who bagged five gold medals in the 2nd SAF Games in Dhaka in 1985.

India has topped every edition of the South Asian Games since its inception in 1984.

BAF General Secretary also hopes the archers can replicate such performance in the Olympic Games-2020 as well which is set to start from July 24, 2020 in Tokyo.

“I’m really very happy. We came closer to our target, but in some disciplines we were not up to the mark but we are not disappointed. There were some events where we expected gold but ended up with silver. It will be much better if we got gold at those disciplines,” said BOA Secretary General to the press after ending of the game.

Bangladesh contingent Chef de mission Asaduzzaman Kohinoor said that they are content with the number of gold medals Bangladesh earned and were happy to be able to surpass Bangladesh’s previous SA Games record.

“But, in order to earn success in this game, there is no alternative to proper training and long-term planning,” he added.