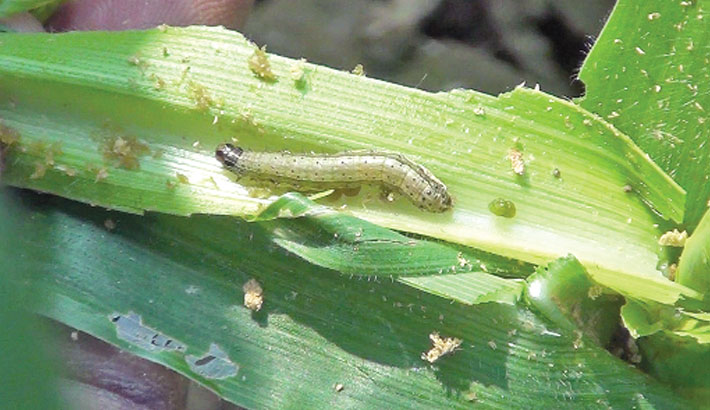 CHUADANGA: The lethal Fall Armyworms that arrived in Bangladesh in 2018 after ravaging cornfields of the Sub-Saharan Africa, have laid waste to cornfields in the district, and are spreading fast compared to last year, causing worries to farmers.

Farmers said they are not seeing any results even after using various pesticides of renowned brands, reports UNB.

Talking to the agency, Sufi Rafiquzzaman, additional deputy director of Department of Agricultural Extension in the district, said the existence of this pest was first detected in the field of Golam Mollik, a farmer at Gobindahuda village in Damurhuda upazila last year.

“Later, the sample of the pest was sent to Dhaka for tests. It was confirmed on December 22 that it was Fall Armyworm,” he added.

He explained that the pest could not do much damage last year due to cold weather but the Fall Armyworm has attacked the cornfields this season ahead of time.

According to Food and Agricultural Organisation, Fall Armyworm (FAW), an insect that is native to tropical and subtropical regions of the Americas, prefers maize, but can feed on more than 80 additional species of crops, including rice, sorghum, millet, sugarcane, vegetable crops and cotton.

FAW was first detected in Central and Western Africa in early 2016 and has quickly spread across virtually all over the Sub-Saharan Africa. In July 2018, it was confirmed in India and Yemen. By December 2018, it had been reported in Bangladesh, Sri Lanka and Thailand.

Visiting various cornfields in Chuadanga sadar, Damurhuda and Alamdanga upazilas, the UNB correspondent found the fields infested with this pest, and sadar upazila is the worst-affected one.

“This pest attacks the stalk and then eats up its fruit-bearing portion, ruining the corn plant,” Afser Ali, a farmer at Kulchara village in Chuadanga sadar upazila, said.

This farmer claimed that the intensity of this pest attack is several times higher than last year. The pest is spreading to other cornfields every day, and the pesticides of renowned companies are not working, he added.

“I sowed maize this season on three bighas of land and for that I had to spend Tk 13,000-14,000 per bigha. But all of those have Beeb ruined by this pest,” Shahbul Islam, a farmer of Baradi village in Alamdanga upazila, lamented.

Now, he is spending sleepless nights thinking about how to repay the loans he has taken from moneylenders.

Shafiqul Islam, a farmer of Ramnagar village in Damurhuda upazila, alleged that no official from the agriculture department visited the fields even after the cornfields were ravaged by fall armyworms.

“During this time of calamity, hundreds of farmers like me have given up hope as they didn’t get any support from the agriculture department,” he said.

According to Ali Hasan, deputy director of Department of Agricultural Extension in Chuadanga, corn was sown in 40,000 hectares out of the target of 48,000 this season.

“The cultivation was hampered by the attack of Fall Armyworms in the beginning. However, it has come down to a tolerable level,” he claimed.

The officials at the department are working day and night to solve the problem and giving advice on using pesticides to exterminate this pest, he added but he could not say the actual areas of land affected by the Fall Armyworms.